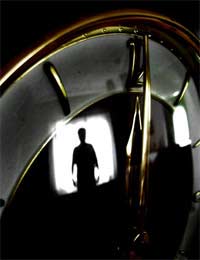 In the late 40s and early 50s when UFO fever seized Britain as it did most other parts of the world, interest in the subject developed from an unlikely quarter: Buckingham Palace. Prince Philip, it seemed, was a "UFO nut". He subscribed to the Flying Saucer Review and apparently still does.

Philip’s interest in flying saucers may have been stimulated by his uncle, Lord Louis Mountbatten. Mountbatten’s interest in UFOs became public knowledge in the early 1950s. Indeed, through journalistic contacts, he encouraged public discussion of them, thinking that here was a new phenomenon which deserved to be taken seriously. When one of the workers on Mountbatten’s estate was late for work one day, he gave the excuse that he had seen a UFO in the sky and had stopped to watch it. Mountbatten questioned him enthusiastically and, perhaps flattered by the attention, the man later claimed to have been visited by the aliens again. This time he was taken aboard their spaceship and whisked round the planet to see the pyramids

.In 1955, Prince Philip’s interest in UFOs leaked out. One newspaper reported that he had asked to receive copies of every UFO report received by the Ministry of Defense. The report was denied but suspicions lingered. They were to a large extent confirmed when a former royal equerry, Peter Horsley, published his autobiography in 1998.

Horsley described how he had personally investigated many of the UFO sightings reported by Britain’s service personnel on behalf of Prince Philip. With the support of Buckingham Palace behind him, Horsley could go wherever he wanted and get his questions answered. As a result, if any RAF pilot reported a UFO encounter in 1950s Britain, before long he could expect Peter Horsley to turn up and interrogate him on behalf of the Prince. Quite a few UFO witnesses were also invited by Horsley to come to Buckingham Palace and meet Prince Philip personally. Horsley did his best to screen out obvious wicks though, including George Adamski, who was deemed not credible.

Royal interest in UFOs has continued into modern times. In 1989, as crop circle mania seized Britain, a book on the topic was reported to be on the Royal Family’s summer reading list. So what does it all stem from? Could there have been a UFO sighting in the Royal Family that has never been made public for fear of ridicule? Have they been privy to classified information which tells the true story of UFOs? Or could it be something more sinister?

David Icke, the former Coventry City goalkeeper who became a BBC news reader who became a prophet and saviour of the world (self-styled), believes the Royal Family are reptiles. No, really. He thinks they are members of an alien reptilian race who are able to disguise themselves as humans. Could this account for Prince Philip’s strange fascination with the UFO subject? Was he worried about being exposed as a lizard man? Or was it all just innocent curiosity?

Royal fascination with the subject of UFOs is certainly an interesting historical curio. Whether it stems from them knowing something we don’t, or whether they’re just as bewildered by the phenomenon as the rest of us, will have to remain the subject for speculation.