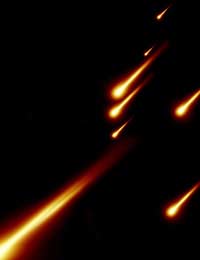 In the US, stories of crashed flying saucers and alien bodies being recovered from the wreckage are ten a penny. In the UK, however, they’re much more rare. In fact, only one has ever gained much traction over the years : the Berwyn Mountains incident. Some call it the “Welsh Roswell”.

The events in question took place near the Berwyn Mountains in Wales. That night, January 23 1974, many residents of the local villages had been seeing strange lights streaking across the sky for hours. According to the experts, this was a bolide meteor shower. At around 8.30 p.m. the villagers heard a colossal explosion and felt a tremor rip through their homes, disturbing the furniture and knocking objects off shelves. Scientific instruments elsewhere recorded the tremor as registering between 4 and 5 on the Richter scale.

Everyone wondered what had happened. Many believed an aircraft had just crashed into the mountain. Pat Evans, a nurse, left her home and peered up into the night. High on the mountain, she could see a mysterious orange glow. At first she thought it must be the aeroplane on fire. The glow didn’t move at all, though, like flames should have done as they flickered back and forth. Spherical and perfectly still, it pulsated between red and orange. Lower down on the mountain she could see a number of smaller lights. These bobbed around in a way suggestive of handheld lanterns being carried by people climbing the hill. It must be a rescue party off to search for the crashed plane, she thought, but then wondered how it could have been arranged so quickly.

Thinking that her nursing skills might be useful to anyone who had survived the crash, Pat Evans made her way up the mountain a little way. Before she had got far, however, she realised that if a crash had occurred, it must have been on a part of the mountain that was not easily accessible. So she turned around and went home.

Police participated in the search for the downed aircraft, in some cases commandeering vehicles to help. But no aircraft was ever found – at least none that was ever revealed publicly. In the days following the incident, a group of official-looking strangers arrived in town and went around questioning the villagers about what they had seen that night.

A UFO Crash in the Berwyn Mountains?

The event attracted a brief flurry of media interest at the time but this quickly died away. Later, however, the story attracted growing interest from those who believed that some kind of cover-up had been perpetrated. In their view, an alien spacecraft had smashed into the hills that night and a secret operation was mounted by the British government to recover it.

In the 1990s various witnesses came forward and dropped a word in the ear of certain ufologists, claiming to have been part of the recovery operation. Alien bodies, they said were picked out of the wreckage, carted away on trucks and taken to the Porton Down biochemical warfare centre for analysis. Some locals spoke up, saying there had been a substantial military presence in the town at the time, that roads had been sealed off and people shepherded away from sensitive areas. A few even claimed they had seen strange boxes being carried away in lorries. And who were those mysterious strangers? Could they have been Men in Black (MIBs)?

The saucer retrieval story gathered momentum, and soon the debunkers arrived on the scene.

These sceptics insist that those who remember a military presence are confused, getting mixed up with other incidents which occurred years before and years afterward. In these other incidents, which occurred in 1972 and 1982, military aircraft did crash into the mountain, there was a strong military and police presence, and the authorities did seal off certain areas while the search and recovery operations proceeded. The stories of strange boxes being carried away may originate from the same source.

The sceptics go on to tear apart every element of the Berwyn Mountains UFO mythos. The mysterious strangers who showed up in the village in the days afterwards were just researchers from the British Geological Survey, they say, there to investigate a possible earthquake, which, in the sceptics’ account, also explains away the tremor. What about the witnesses? Fakers or disinfo artists, say the sceptics. The explosion? Perhaps a sonic boom. Certainly, it does seem a curious coincidence that a sonic boom should so immediately be followed by an earthquake.

This still leaves the mysteriously glowing sphere spotted by Mrs. Evans and others. No problemo, say the debunkers. Those were poachers on the hills, up to no good, killing game without a licence.

So what should we make of the “Welsh Roswell”? There’s no doubt that some of the early accounts of the Berwyn Mountains UFO were lurid and overblown. The debunkers have managed to do a real hatchet job on them. Some researchers remain unshaken in their belief, though, that something mysterious really did happen that night.

Warminster: The Thing
Share Your Story, Join the Discussion or Seek Advice..
These debunkers are really funny guys. They really are. With their unmeasurable wisdom humanity should be, at least, 200 years technologically advanced in relation to where we are now. Why? They have an answer to everything. Someone should make a Sunday's newspaper comic strip using their answers and explanations as the scriot for their adventures. Again, very funny guys these charlatans really are.
Space Gladius - 21-Jul-14 @ 9:14 PM
Title:
(never shown)
Firstname:
(never shown)
Surname:
(never shown)
Email:
(never shown)
Nickname:
(shown)
Comment:
Validate: