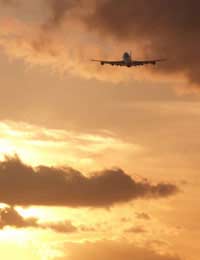 Britain has been blessed with quite a few Close Encounters in recent years. One of the most memorable of these came to be called the Guernsey UFO incident.

The incident occurred on April 23, 2007. Captain Ray Bowyer was at the controls of a Tri-Lander passenger plane flying from Southampton to Alderney, near the island of Guernsey. As he approached Alderney, Bowyer noticed something extraordinary in the sky : a cigar-shaped bright yellow object about 40 miles away, sitting completely motionless. Bowyer estimated its altitude at about 2000ft.

At the time, Bowyer judged that the object was about the size of a Boeing 737, or even twice as large, but later he changed his mind about this and concluded that it must have been much larger, perhaps even a mile long. For all the time that it was visible, nine minutes in total, the object sat perfectly still. The passengers in the aircraft saw it too, crowding round the windows to have a look.

Unfortunately, no one managed to get a photograph of the UFO, although that didn’t stop a few fake ones from surfacing on the internet afterwards. There was some corroboration from another pilot, however, who spotted the same object from the opposite side. When Bowyer contacted air traffic control in Jersey and asked if they had picked up the UFO, he was told they hadn’t. This is no great surprise, though, as their radar would not detect an unmoving object.

A few minutes after the first UFO had been seen, Bowyer spotted an identical one a few miles away to the west. He considered piloting his aircraft closer to one of the objects to get a closer look but, deciding that his first responsibility was the safety of the passengers, he thought better of it.

After the aircraft landed, word quickly got around. Soon the Guernsey UFO sighting was being widely reported in the local and national press and even on television. The MOD was informed but decided not to investigate.

Over the years, there have been many sightings of UFOs by professional pilots. From an evidentiary perspective, these are especially valuable because pilots are used to scanning the skyscape. They know what’s anomalous and what isn’t. And being highly trained, trusted professionals, their word counts for something.

Unfortunately, along with a job which gives them a good opportunity of seeing strange things in the sky, and the experience to evaluate them, comes a great deal of professional pressure to keep quiet about it. Part of the pilot’s job in flying a passenger jet is to project an image of reassuring stability to the passengers. Unfortunately, in the popular mind, UFOs and stability are two concepts that don’t often go together. When pilots see something strange, therefore, they tend to shut up about it. They may tell friends and family, but don’t usually make a public fuss.

The Guernsey UFO incident was one of the rare exceptions to this general rule. Of course, in this instance, not only the pilot witnessed the UFO, but all of his passengers did too, so perhaps the cat was out of the bag anyway, but the captain was at least willing to discuss the incident candidly afterwards, so he does deserve credit for that.

As Bowyer said himself in one of the interviews he gave after the incident : “In the profession it’s fairly well known that if you come forward and tell these sort of stories, you become unemployable.” Bowyer himself encountered no trouble , though. Having worked for the same small airline for many years, his employers proved sympathetic and had complete faith in him.

If only other airlines displayed a similar attitude, undoubtedly many more good UFO sightings would have been reported over the years.