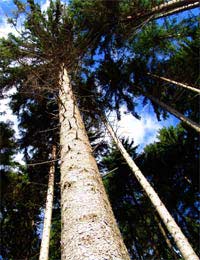 The Derchmont Woods encounter – sometimes known as the Livingston Incident – is one of Britain’s most enduringly strange UFO cases.

It involved forestry worker Robert Taylor. One day in 1979 as he was passing through the woods, accompanied only by his dog Lara, he was astonished to see a hulking grey, globular object – apparently a vehicle - in front of him, either sitting on the grass or hovering just over it. As he gaped in total amazement, two small spheres, similar to old-style water mines, appeared to drop from the vehicle. They scooted along the ground towards him, making a strange plopping sound. When they reached him, each protruded small spikes from its body which were then jammed into the legs of his trousers. As he struggled fiercely, but in vain, they began dragging him back towards the larger craft. After a moment or so, Robert heard a hissing sound, felt a pungent odour and lost consciousness.

When he woke up, Robert found himself still lying in the same position as before. His dog Lara was still there, barking furiously, clearly still agitated. Feeling aches all over his body, Bob struggled to his feet and attempted to make his way home. He could not start the engine of his truck so decided to walk the one mile distance instead. On reaching his house, he blurted out a hurried account of what had happened to his alarmed wife. Although she found it hard to credit his story about an alien spaceship, it was clear that something disturbing had happened to her husband. Suspecting that he might have been the victim of an assault which had unbalanced his mind, she called the local police.

The police shortly arrived and Robert repeated his account to them. Although the story seemed preposterous, it was their duty to investigate it. They noted that the tear marks on his clothing and the bruises on his body were fully consistent with what he had described. Returning with Robert to the scene of the incident, they found some strange marks on the ground which went some way towards corroborating his account. A criminal investigation was started but no charges were destined ever to be brought.

Over the years, sceptics have advanced a number of unconvincing explanations of Robert Taylor’s experience. These include: the notion that the whole thing was dreamed up by the Livingston tourist board to stir up popular interest in the town; that what Taylor saw was ball lightning; or that he hallucinated the whole thing in an epileptic fit. There is not a shred of evidence to support any of these lame attempts at dismissal.

As with so many of the most famous UFO incidents, such as the Kenneth Arnold sighting, it was, to a large extent, the character of the eye-witness which lent the encounter such an enduring significance. Taylor’s sincerity was apparent to all who listened to him. The simple honesty of his character together with a lifelong reputation for reliability and stability made an impression on everyone who met him. This was clearly no fantasist or publicity hound.

In later years, as Robert Taylor’s story continued to circulate, some indirect confirmation of it emerged. A number of eye-witnesses came forward, claiming to have seen strange objects in the sky over West Lothian around the time of Taylor’s encounter in Derchmont Woods. The police file remains open.

Robert Taylor passed away in 2007. He maintained until his last that he had given a full and accurate account of what occurred to him that day in Derchmont Woods. Today, a plaque and a small statuette commemorate the spot.