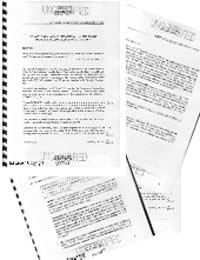 For decades, the British government had treated the UFO subject dismissively, routinely responding to public enquiries with the standard line that any apparent air anomalies had been judged to be of “no defence significance”.

In general, the government gave the impression of being utterly uninterested in UFOs. In 2005, however, it was discovered that, in the late 1990s, the British government had commissioned a secret study of the UFO phenomenon. Its goal was to determine whether UFOs - or UAPs (Unidentified Aerial Phenomena) as the British government prefers to refer to them - represented any threat to the United Kingdom or whether anything of potential military significance could be learned from a study of them.

The study was contracted out to an external defence contractor whose identity remains unknown. With work starting in 1996, the project had been completed by the end of 2000. Its final report, entitled The Condign Report, was circulated among a select group of top Ministry of Defence staff, but no further. It was classified secret and stamped “UK EYES ONLY”.

The first part of the secret project involved computerising the MOD’s large database of UFO sightings, categorising them in various ways with the goal of eventually being able to sift through the mass of reports and see statistical patterns. Governmental responses to the phenomenon in other countries were also carefully considered.

The Condign Report – Read it for Yourself

Although the Condign Report was originally classified Secret, thanks to the intrepid work of some British UFO researchers, the report has now been released to the public. It seems the researchers, derisively dubbed “UFO Spotters” by one civil servant in an internal memo which has also been released, made relentless use of the UK’s new Freedom of Information legislation to bombard the MOD with requests. In the end, it was decided that so much civil service time was being taken up with handling them that it was easier just to release the whole thing.

Although parts of it have been redacted, it does contain a wealth of fascinating detail – including photographs of apparent UFOs - in what is a broad overview of the phenomenon. One particularly interesting observation in the report is that “there is evidence that civil airline crews are seeing far more than they are reporting for fear of ridicule or the potential effect on company business”.

Perhaps predictably, the Condign Report concludes that there is no evidence that UFOs represent signs of an extra-terrestrial presence on Earth. Instead, it concludes, UFO sightings probably stem from the mis-identification of man-made objects and mysterious weather effects known as “atmospheric plasmas”.

The methodology of the report has been criticised by UFO researchers. They point out that it was largely based on existing written reports of sightings and that no new interviewing of witnesses took place. In addition, the timescale for the project was rather short, making a truly in-depth study impossible.

Even if its conclusion is predictably dismissive, the Condign Report makes fascinating reading. Anyone with an interest in the UFO phenomenon will enjoy taking a look at it.

The Cosford Incident
Share Your Story, Join the Discussion or Seek Advice..
In summer of 1959 (50 years ago) I saw a saucer shape ufo but knew nothing of such things: it was just a machine in the sky, it fixed in stillness above; I tried hard to see into the small oval shaped windows but they were frosted and I couldn't see anything then it whisked off fast and silent. I just forgot about it till many years later.
willax - 20-Jan-14 @ 9:30 PM
In October 1995 I was jogging in Shotts,lanarkshire,at 21.45pm when I looked up and saw a large oval shaped object about 50 feet long and glowing a brilliant white light about 200 yards away at rooftop height slowly over houses in Staine,Shotts. I watched it for about two mins,coming from the direction of television masts to the direction east towards Edinburgh.This was the third time I have seen a UFO over several years.I am now 67 years of age. Yours Sincerly.Hugh.
joinerjoe1944 - 24-Nov-11 @ 3:12 AM
Title:
(never shown)
Firstname:
(never shown)
Surname:
(never shown)
Email:
(never shown)
Nickname:
(shown)
Comment:
Validate: