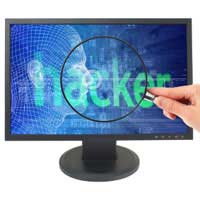 You’ve probably heard of Gary McKinnon. He’s been in the news a lot in the last few years: the awkward-looking computer geek who’s trying to fend off extradition to the United States for hacking into the US government’s computers. His lawyers argue that he faces lifetime imprisonment in the US, possibly in Guantanamo Bay, for an offence committed in Britain which, under British law, would probably merit only a few months’ community service.

What you may not have heard is why McKinnon did what he did. From an early age he had become fascinated by the UFO mystery, taking a cue from his father, who hailed from Falkirk, centre of the now legendary Falkirk Triangle and who shared with his son his own great interest in the subject. Like many involved in the field of ufology, McKinnon became convinced that the US government knew far more than it was publicly revealing about UFOs. He got involved in computer hacking in an attempt to find out the truth.

Gary McKinnon – Hacker on the Loose

McKinnon burrowed deep into the US government computer networks, accessing many machines across a range of agencies. He insists he is not some “mastermind computer hacker,” but simply took advantage of some relatively mundane gaps in security such as blank administrator passwords. When targeting a network, he would find his way into one computer, install software which would allow him to take remote control of it, then use that as a platform to penetrate machines elsewhere on the network. Among the computers he accessed were those belonging to the US Air Force and NASA.

So what did he actually discover? The most interesting thing, according to the interviews he has given, was a list of what were described as “Non-Terrestrial Officers.” What could this mean? Many UFO researchers believe that the US government has had an established relationship with alien beings for some time and some claim that, under the title of Project Serpo, an exchange program took place in which 12 military personnel went to live on an alien planet. Could McKinnon’s find refer to this or a similar programme? Or could it be something perfectly innocent? Unfortunately, unless McKinnon knows more than he has told us so far, it seems we will have to keep wondering.

McKinnon also made some attempt to confirm the Donna Hare story. Some years ago, Donna Hare went public, claiming to be a former NASA photo technician and insisting that NASA was retouching photographs of the lunar surface, airbrushing out “anomalies” such as flying saucers. Hare claimed that this photo retouching work was done in building 8 of the Johnson Space Centre.

McKinnon hacked into the building 8 computers. He did indeed find a vast number of photographs, suggesting that it was, in fact, a centre for photographic work, and lending some credibility to Hare’s claims. Naturally, McKinnon tried to view the images. Unfortunately, each file was around 300 megabytes in size and he was using a slow dial-up modem, meaning it would have taken him a very long time to download even one. While he was attempting to view the first image, someone in the Space Centre detected the intrusion and cut off his network connection.

After a hacking career lasting several years, McKinnon was caught in 2002. His home was raided and his computers confiscated. No charges were brought against McKinnon in the UK, but authorities in the US started extradition proceedings against him. These have continued to this day and may continue for several years yet.

In 2003 Britain signed a new extradition treaty with the United States. This new treaty included far fewer safeguards for British citizens. Under the previous arrangement, the US government would be required to present evidence in a British court that a crime had been committed. A British judge would review the evidence and make a decision on whether or not extradition should take place. Under the new treaty, however, none of this happened. Extradition was almost automatic.

Some in Britain protest vigorously about this treaty, arguing that it exposes British citizens to the “cowboy-style” justice of the American legal system, where standards are less stringent than they are in the UK. Moreover, they point out that America is not even fulfilling its end of the bargain. The treaty has yet to be ratified by the U.S. senate and, therefore, has not come into force. It is partly for this reason that the McKinnon case has become something of a cause célèbre in Britain.

A campaign to free Gary McKinnon exists and has a website at:

You can learn much more about the case there.

So why is Uncle Sam so desperate to put the screws on our Gary? Did he stumble on something important, perhaps something whose significance he may not himself have grasped? Or could it be that he does grasp it and simply hasn’t revealed the full extent of his knowledge, holding it in reserve as a kind of trump card to be played at a later stage of the game? As the McKinnon case plays out over the next few years, perhaps more revelations will be forthcoming.