Home > History of UFOs > UFOs: The Evolution of Public Perception 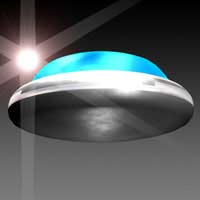 You would think that on a pan-galactic time-scale, 60 years or so – the length of time in which the UFO phenomenon has been part of our public consciousness – would be relatively insignificant. During that time frame, we wouldn’t expect to see aliens themselves undergo much technological evolution, or to see certain alien factions rise to displace and dominate others. Surely that would all have been worked out long ago, before they decided to make contact with we Earth-borne primitives? Perhaps surprisingly, however, there have been massive shifts in our perceptions of UFOs and their occupants during the last few decades.

UFOs – the Influence of Cinema and Television on Public PerceptionIf UFOs aren’t real, they must be the product of our imaginations. And certainly, our perception of the phenomenon appears to have been influenced at various times by the works of fiction we entertain ourselves with on the cinema and television screens.

One example of this comes from the descriptions of the aliens themselves. In the 50s and 60s, reports of benevolent extra-terrestrials who were either human or almost human were very common. Frequently these were described as “Venusian” or “Nordics” and, typically, they would offer warnings to the human race about the problems we were creating for ourselves. All of this meshed perfectly with the image of Klaatu, the friendly human alien from the film “The Day the Earth Stood Still,” who came to warn humanity about the dangers of our warlike tendencies.

Later on, reports of small aliens with an almost insect-like appearance featuring large heads and slanting eyes became more common. Some have speculated that Steven Spielberg’s film Close Encounters of the Third Kind may have been responsible for the change. It’s also difficult to avoid thinking about the effect of the Close Encounters film when you read reports of the UFO incident at Rendlesham Forest. The observers describe UFOs which feature arrays of multi-coloured lights, some of them flashing in sequence, just like in the movie, which had been released not long before.

Similarly, the Phoenix Lights incident, in which witnesses described a colossal UFO which filled up much of the sky, occurred shortly after the film Independence Day was released. Independence Day told the story of an alien invasion of Earth, with the aliens arriving in gigantic spaceships which took up much of the sky. It’s hard to avoid the suspicion that expectations of what a UFO should look like are to some extent being shaped by the cinema.

On the smaller screen, the X-files series stirred up a great deal of interest in the UFO subject. Reports of sightings vastly increased; the membership rolls of UFO organisations swelled; and the sales of magazines and book specialising in the subject soared. After the television series reached the end of its run, however, there was a great deflation. Sighting reports dwindled; magazines closed; organisations shut down. Ufology entered its lean years.

At the dawn of the UFO era, the “visitors” tended to be perceived positively by those who boasted of being in contact with them. Often, these privileged individuals would be whisked on tours of the solar system to see the alien home planets. Our knowledge of the planets in our solar system is now much greater than it was then and we know that this was impossible : they are incapable of supporting human-like life.

Perhaps it is this knowledge - that there is no one close to us, that if advanced extra-terrestrial life does exist, it is from the far elsewhere, and has potentially evolved under a completely different set of circumstances - that has contributed to the growing negativity in our perceptions of aliens.

In recent decades, reports of unpleasant contact with extra-terrestrials have become increasingly common. Rather than being taken for jolly jaunts around the solar system, most modern contactees report being plucked against their will from their daily lives at random moments, imprisoned and experimented on in deeply invasive ways. Sometimes bizarre, interrogation-like sessions are reported in which the aliens play mind games on their human victims.

Though the first high-profile alien abduction case, that involving Betty and Barney Hill, was relatively benign, those which followed have featured increasingly sinister elements. Whether the aliens are reported as hostile or just clinically detached, they clearly have an agenda of their own and it isn’t helping the human race.

There seem to have been almost as many fads or fashions in our perceptions of UFOs as there have been in music, cinema or vehicle design. For some, this calls into question the underlying reality of the phenomenon itself, making it appear to be nothing more than a reflection of our own deep-seated yearnings. Others insist that beneath the fluff, a hard core of substantive truth remains.
Next Page

Famous People Who Have Seen UFOs
Share Your Story, Join the Discussion or Seek Advice..
I saw a UFO one time, and it stayed over my head for a min, then sped off in incredible speed
cool_girl - 3-Jun-15 @ 6:43 PM
could be that the alien agenda is a very long-tern developmental one, the goal of which is to eventually get humanity into the space-based community; so, we may not 'see' the big picture, just the horrors of boot-camp here preparing future human, & post-human, generations for whatever; if you look at the universe, you'll see development, evolution, wherever you look; the aliens may simply see themselves as conscious agents of the unconscious universes' evolution-agenda
Barry Smith - 15-Oct-14 @ 5:44 PM
Title:
(never shown)
Firstname:
(never shown)
Surname:
(never shown)
Email:
(never shown)
Nickname:
(shown)
Comment:
Validate: