Home > History of UFOs > Where do Aliens Come From? 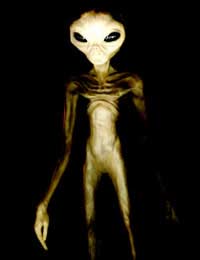 If UFOs really are alien spacecraft, it would certainly be of interest to know where they are from.

The truth is that, if aliens are visiting us, there is no sure way for us to know where they come from. The universe is vast. Our knowledge of it is limited. And our knowledge about the capabilities of any possible alien technology is even more limited. For all we know, our paranormal visitors can teleport instantaneously from one galaxy to another, so trying to make calculations based on which systems are within reasonable flying time from Earth would seem to be a futile exercise.

The only driblets of information we have come from the reports of contactees. Of course, these are constantly hedged round with credibility problems, so must always be sifted with a sceptical eye.

It’s fascinating to note how the home worlds attributed to aliens have changed over time as our own knowledge of the universe has expanded. For example, early in the 20th century, Mars was widely touted as the possible host of an alien civilisation. Some authors published books claiming they could see canals or cities on Mars. In War of the Worlds, H. G. Wells told the story of a Martian invasion of Earth. As late as 1938, this idea could bring people panicking onto the streets, as we saw when Orson Welles broadcast his famous radio adaptation of the Welles novel.

Now, of course, we have actually landed spacecraft on Mars. Though life there may still exist at the microbial level, we know it contains no highly-developed civilisations, at least on the surface. No one today would claim to have met aliens from Mars and expect to be taken seriously.

Our knowledge of our own solar system really came on leaps and bounds in the last few decades. It’s interesting to note, therefore, that in the 1950s and 60s many of the early contactees, who claimed to have had contact with extra-terrestrials, would cite a planet in our own solar system as the alien home world. George Adamski, for example, one of the first self-proclaimed contactees, who is now widely but not universally regarded as a fraud, announced that he was in contact with friendly Venusians, who looked much like humans, except a little more blonde and a little more perfect.

Aliens In the Sol System

Nowadays, few of those who say they have been contacted by aliens claim the aliens come from within our own solar system, simply because we know too much about our neighbouring planets for those claims to be credible. One rather clueless exception was a gentleman who appeared on the scene a few years ago, marketing a video he had made claiming he was friends with some aliens who had taken him on tours of the solar system in their flying saucer. On one of these trips, he claimed to have landed on Jupiter and seen a flourishing alien civilisation there. He apparently failed to grasp that Jupiter is a gas giant and thus has no real solid surface for anyone to land, much less build a civilisation, on!

One of the most interesting suggestions emerged from the famous Betty and Barney Hill abduction case. Betty Hill, one of the abductees, was not told specifically by the aliens where they came from. She remembered seeing what looked like a star map, however. Later she described it quite precisely in her accounts of what had happened. A woman called Marjorie Fish decided to construct a model from Betty’s description and, based on it, concluded that the aliens must have come from Zeta Reticuli. This happens to mesh perfectly with what the Majestic documents, which appear to be secret government files, say about the where the alien race known as the Greys come from. It must be remembered, however, that there is an ongoing controversy about the authenticity of the Majestic documents. Astronomers tell us that Zeta Reticuli is a binary system, consisting of stars Zeta 1 and Zeta 2, which orbit one another over long time periods. They are sun-like and located around 40 light years from Earth. At around 8 billion years old, they are significantly older than our own 5-billion year old sun, allowing time for a more complex civilisation to have evolved there. No planets have yet been detected within the system, but that is far from conclusive. Our ability to detect distant planets is still rather limited.

Where Are Aliens From? - Conclusion

Zeta Reticuli has emerged as the most promising candidate so far for an alien home world. It is all the more credible because it emerged indirectly, from a visual description Betty Hill gave of a star map she saw. She did not mention it by name. All we know of it indicates that it would be propitious for life.

Most modern reports of contact with aliens, including Betty Hill’s, involve the Greys, small beings with large heads and bug-like eyes. In recent decades, Zeta Reticuli has surfaced quite a few times in UFO accounts, and now seems to be well-established in UFO lore as the location of the Grey homeworld.

Famous People Who Have Seen UFOs
Share Your Story, Join the Discussion or Seek Advice..
[Add a Comment]
Oh! Last Monday l saw a flying object fying to the east with a blue light. The object landed near my compound and a tall human-like organism came outrunning towards my fields. Because l wanted to have a better look on the object, l ran into my house and took my binocular. when l came back l found the object gone!
Emperor - 27-Feb-17 @ 10:46 AM
Why does the government trick us& choose to decieve & manipulative humans.
tony - 19-Nov-16 @ 8:43 AM
so interesting i love the way you punctuate your writing
bluewalls69 - 12-Feb-16 @ 9:08 PM
The list grows, mars, dark side of the moon, hollow earth? The latest from just below the earth's mantle. It's interesting that NASA does not really promote the fact they have found an earth type planet with the possibility to sustain life. It's going to get interesting when the USA and Russia return to the moon in the next 10 years as announced this week if they get a hostile reception. The question is if they publically acknowledge there is someone up there and they do not get any trouble, have they been working with them for years and covering things up.
Zaf - 1-Nov-15 @ 8:46 PM
I figured they were from mars.
Krissy - 28-Sep-15 @ 9:16 PM
Maybe our Father had an older brother who made one of the other planets first. After that God made His planet he made his creatures, the aliens. The aliens were made centuries before the Earth. They came up with there ways to check us out and find out what we are. We'll eventually get there. We find more ways to reach more outcomes each year. Its my joke the aliens try to catch us with all the bad stuff. When youre getting pulled up on negatives, alcohol, cigs, drugs, food, sexual tendencies non-emotionally/ just cravings for anything over board. We're the fish and the aliens are humans catching us with easy bait.
Kitty - 28-Sep-15 @ 9:13 PM
Open the curtains yousit spotty freaks
d.cadam - 14-Jul-15 @ 12:39 AM
So interesting,i have only seen Alien on movie but i need to know more about them.
Chiko - 1-Nov-14 @ 4:15 PM
Hi guys my name is dr.robert I am a astronout I go to space evrey day in it was the late 2011 when I was in my spaceship I maneged to see a ufo alien and it was headed to mars now seeing a alien is a little scary but you have to face your fears when I saw that alien I had to take a picture of it in report it to the ufo people and guest what I was on tv but when that alien spaceship was headed to mars with a blink of a eye it vanished and in the late 2012 when me and my workers was headed to the spaceship we heard a big crash and when we look to see it a ufo had crashed in earth and something gray came out with big black eyes and it was completly bald and when we took a picture of it scincetist say aliens come from planet mars
dr.robert - 24-Feb-13 @ 11:00 PM
After reading these comments about UFOs, I must state that I have never seen a UFO that I know of, just watching TV and movies films, but I have written a couple of fictional books books that are based on UFOs called "Star Seekers and UFO Contact" that are on internect and have been published by Rossendale Books and are hopefully going to be made into movies by a person named Joern Utkilen possibly in the future, by gods luck, and other little sci-fi things.
Moonman - 1-May-12 @ 7:39 PM
This site was a little helpful
$Lucky$ - 25-Jan-12 @ 9:17 PM
Wow really interesting, but there is no way some person saw a real alien. Plus aliens didn't take them on tour. There is just no way. Well who ever wrote this was good at it because it was really interesting and hoping it was true.
majenta - 17-Apr-11 @ 7:36 PM
Title:
(never shown)
Firstname:
(never shown)
Surname:
(never shown)
Email:
(never shown)
Nickname:
(shown)
Comment:
Validate: