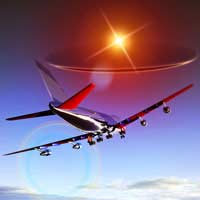 During the Second World War, all sides made great advances in developing the technology of war. Germany however, stood out for the remarkable progress it made in developing rocket propulsion. V1 and V2 rockets rained down on Britain from 1944 until the end of the war. They brought terror, although the number of deaths they caused was relatively small.

In the latter stages of the war, as Germany’s defeat was being finalised, Britain, the United States and the Soviet Union scrambled to acquire as much of Germany’s scientific assets – knowledge, hardware and people – as they possibly could. All sides managed to lay their hands on some of the precious scientists and engineers who had worked on the German rocket programme, but were there other secrets too?

Foundation of the Belief in Nazi Flying Saucers

There was a swirl of occultism about Nazism which occasionally included mention of extra-terrestrials. The term “vril,” for example, is often now associated with the Nazi occult. Vril refers to a mystical source of power controlled by a race of super beings, the Vril-Ya, who are supposedly resident somewhere within the bowels of the Earth, through an entryway which is accessible only through the mountains of Tibet.

Nazi philosophy emerged from the Theosophical Movement whose rambling occult speculations included notions of racial classifications and mysterious wise men living in Tibet. Though the term “vril” actually came from a late nineteenth-century popular novel written by Edward Bulwer-Lytton, somehow, in the heady days of early 20th century occultism, fact and fiction intermingled and some, particularly Nazi sympathizers, came to believe that the concept had an underlying reality to it.

The genesis for the speculation about a Nazi connection to flying saucers lies in the Foo Fighter phenomenon. The Foo Fighters were a bizarre aerial phenomena encountered by Allied pilots flying over enemy territory in the Second World War, particularly in its closing stages. Looking like glowing balls of light, they were often reported to track Allied planes at a distance, altering course as needed, without obviously interfering with them in any way – although some claims of radar malfunction in proximity to them have been made.

Following the war, a fascinating article was published in Germany’s leading news magazine, Der Spiegel, in which Rudolf Schriever, described as a former pilot and aircraft designer in the German air force, claimed to have worked during the war on designs for an unusual circular aircraft which he called a “flying top.” Although he was no longer working in that field, Schriever believed that his designs may have been apprehended by the victorious powers and that the flying saucers then being spotted in waves all over the world were simply aircrafts like the one he had designed – only more evolved.

Schriever claimed that the actual prototype saucer had been destroyed towards the end of the war to prevent it falling into enemy hands. A number of other men – including Belluzo, Miethe, and Habermohl - popped up over the years claiming to have worked on flying saucer-like designs for the Axis powers during the Second World War or, in some cases, to have seen them in flight.

Speculation about Nazi involvement with flying saucers ranges across vast extremes. At one end, there are those such as Holocaust denier Ernst Zündel who believe that Hitler was in contact with sympathetic extra-terrestrials and that, after being defeated in the war, a Nazi remnant retreated to a secret flying saucer base in the Antarctic.

There was an unusual expedition to the Antarctic, led by the American admiral Richard Byrd in the years 1946 - 47. Dubbed Operation Highjump, and purportedly a scientific mission, its complement contained a strikingly large number of military vehicles for a visit to what was, presumably, a largely uninhabited wilderness of snow and ice. Fervid Nazi UFO believers insist the real goal of the expedition was to attack the secret Nazi holdout fortress. According to their account, however, Byrd’s forces were beaten back by flying saucers (piloted either by humans or aliens) and the goal remained unfulfilled.

At the other end of the spectrum of opinion, there are those such as Kevin McClure who, having thoroughly researched the issue, concluded that, though the Germans were indeed working on some unconventional aircraft designs, by the end of the war there is no evidence that anything resembling a flying disc had ever got off the ground and no real evidence that secret Nazi technology formed the basis for the modern UFO phenomenon, much less that Hitler was in contact with friendly ETs.

Most of the “evidence” for a Nazi-flying saucer connection has come in the form of retrospective claims of involvement from people whose backgrounds are difficult to check out. Sceptics dismiss them as fantasists. A few relevant photographs have also surfaced but their authenticity is called into question. There is even an amusing photograph of Hitler shaking hands with an alien which, it can safely be said, is a fake.

Claims of a Nazi ancestry for flying saucers began to be heard almost as soon as the saucer phenomenon first manifested itself. The legend has been added to bit by bit over the years until it has taken on a life of its own. Many of the claims made appear to be utterly fantastic in nature. Whether there is a kernel of truth beneath the dream-weaving, or whether the story is nothing but a fantastic myth, can still be debated.

Famous People Who Have Seen UFOs
Share Your Story, Join the Discussion or Seek Advice..
I live in Ohio and actually touched a spacecraft. It was very small. Must of been what they contribute to the Ant People.. It flew straight up. Plus there were symbols on it, I dont think they were for them. From everything Ive gathered our local forces are very much aware and are in cahoots. They've been here for thousands of years from what I can gather.
Aunt Bee - 13-Aug-14 @ 1:53 AM
Title:
(never shown)
Firstname:
(never shown)
Surname:
(never shown)
Email:
(never shown)
Nickname:
(shown)
Comment:
Validate: