Home > Investigating UFOs > How to Get UFO Files from the Government 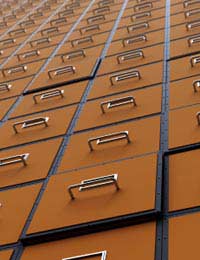 Quite a few people think that the government must be hiding a treasure trove of secrets about UFOs. Some even believe the government has been conspiring with the aliens for decades. Wouldn’t it be great, then, if you could get access to the British government’s X-Files? Well, actually you can.

Not everyone is aware of it, but Britain now has a Freedom of Information (FOI) act. Modelled broadly on the American act of the same name, it grants the public a wide-ranging access to government documents.

Where do you Request UFO Documents?

So you want to request the government’s UFO documents, but how do you know where they will be kept? Many UFO sightings are reported initially to the police, but the police usually just pass them on to the Ministry of Defence. The MOD does have a “UFO desk”. We know this from the many books and articles written by Nick Pope, who used to occupy it himself. The MOD then is the best place to make your enquiry. As well as the standard “UFO desk”, it has come to light that some special UFO investigations have been carried out in Britain by a secret intelligence department called DI55 (Defence Intelligence 55).

Some government UFO files have already been made available online, so you won’t need to request them specifically. If you’re interested in a high-profile UFO incident, such as Rendlesham, for example, there’s a good chance the documents will already have been published on the web, simply because the MOD received so many repeat requests for them that they thought putting them online would save them a lot of bother. Always check the MOD website first, therefore, before submitting a request.

If you have reason to suspect that some other public body will have documents pertaining to UFOs, then you should feel free to make a request there too. Major departments like the MOD will have staff specifically assigned to dealing with document requests from the public. Smaller public bodies may not. In fact, many staff in the more minor public bodies, such as departments of your local council for example, may not even be aware of their obligations under the Freedom of Information Act. It’s always worth invoking the name of the act in your document request therefore. Let them know you’ve got the law behind you in case they’re tempted to just throw it in the bin!

How to Request UFO Documents Under the Freedom of Information Act

The Freedom of Information Act is a powerful new tool that will help UFO researchers pursue their inquiries. Some have already used it to expose a government cover-up relating to the famous Rendlesham incident. There’s no reason why you can’t uncover something too!
Next Page