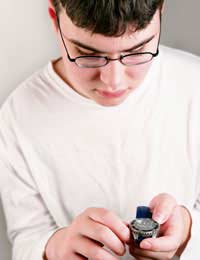 Most of us would love to see a UFO. Some researchers in the field of ufology spend their entire lives studying and writing about the subject without ever having seen one. An intrepid few go out on UFO-hunting expeditions, maintaining freezing-limbed vigils on rural hilltops in the hope of catching some hint of the alien presence.

But wouldn’t it be great if you didn’t need to wrap up warm and scan the night skies constantly, always asking yourself if that light you saw was a star, a plane or an alien spaceship? Wouldn’t it be just fantastic if you didn’t need to wait for the great cosmic dice to roll in your favour to see a UFO? If you already knew one was there, for example, and all you had to do was look up? Well, some people think it really is that simple. All you need is a trusty UFO detector.

UFO detectors come in many shapes and sizes. Some you can strap round your wrist or pop in your pocket; others you can install in your home. All claim to give you warning when a UFO is nearby. Usually, this will come in the form of a flashing red light, though a few also have audible alarms. What sort of range can you expect from these gizmos? It varies. Some manufacturers boast that their devices can detect UFO activity within up to 200km, but most more modestly claim that only UFOs in your immediate vicinity will be picked up.

UFO detectors work by monitoring the state of the Earth’s magnetic field. If local disruptions to it are detected, the reasoning goes, the source of the disturbance may well be a flying saucer. Of course, to establish a stable base line you’ll need to set up your UFO detector far enough away from other sources of electromagnetic interference, such as televisions.

Many classic UFO encounter reports record electrical equipment being interfered with or shut down completely in the presence of a flying saucer. Ufologists interpret this as meaning either that alien technology just naturally interferes with ours or the ETs shut down our equipment deliberately to render us harmless.

All well and good you might say. But do they actually work? One person who was experimented with UFO detectors systematically was Frances Ridge, a regional director of the MUFON UFO research organisation in the United States. Ridge set up his detector (a magnet variometer) in the 1970s and kept a careful record of every time it issued an alarm until it was dismantled in the 1990s.

Thanks to his position within MUFON, he was able to set up relationships with local law enforcement, military and air traffic control personnel, essentially everyone who was ever likely to receive a UFO report, so that they would pass along to him word of any UFO cases that came their way. Over time, he chronicled UFO sighting reports in the area in which he lived. When the project was wound up, he compared the two records. The results were intriguing.

Ridge split up the UFO reports he received using Hynek’s classic Close Encounters classification system. After doing this, he noted a strong correlation between hits on the UFO detector and reports of Close Encounter contact with UFOs of the third and fourth kind – that is actual sightings of the occupants of the craft or interaction with them. There was no correlation between detector hits and more distant encounters or with close encounters of the first or second kind.

Although Ridge’s results were promising, he does emphasise the caveat that the data is too sparse too draw any strong conclusions from it, and believes more experimental work needs to be done to establish the validity of the technique.

Although you shouldn’t think that buying a UFO detector will have you seeing aliens left, right and centre every day of the week, it does appear the principles they are based on do have some validity, and therefore they constitute a potentially useful instrument in the UFO hunter’s toolkit.