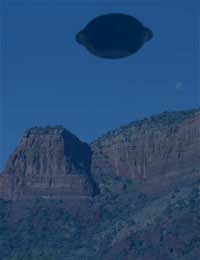 The Aztec UFO case is one of the most curious within the UFO literature. All UFO incidents are controversial. However solid the evidence of a mysterious presence seems in one instance, there are always some to gainsay it : a sceptic for every believer. Believers say it was a UFO; sceptics offer alternatives, such as meteors, weather balloons and the like. Both groups usually agree that something happened, however. The Aztec case isn’t like that. There are those who believe it didn’t happen at all; they insist the entire tale is an invention, made up out of whole cloth by deliberate fraudsters. And not only UFO sceptics say this, but believers too. Still, there is a small minority of researchers who continue to pursue their dogged belief that something strange happened out there in the New Mexico desert.

The story of the Aztec Incident first surfaced in the book Behind Flying Saucers, written by former gossip columnist Frank Scully. The book appeared in 1950. The incident itself was said to have occurred two years earlier, in March, 1948. Scully told of a flying saucer which had landed in a remote part of New Mexico, near the town of Aztec. Oil drilling was about the only thing that went on in that part of the world, and the UFO had first been spotted by some oil workers. They passed the word and soon the authorities arrived on the scene and sealed off the area.

Teams of expert scientists were present and, for a period of two days, examined the object only from a distance using a variety of instruments. The disc was around 100 feet in diameter and, at its centre, sat a cabin. Eventually, the scientists moved closer. They could see a number of what appeared to be glass portholes around the circumference of the cabin. One of the portholes was broken. Peering through the broken porthole, they could see the inert bodies of sixteen small humanoid beings lying around. The occupants were dead. Inserting a long stick through the broken porthole, they were able to press a button which opened a door on the exterior of the craft.

Moving inside, they examined the dead bodies of the aliens more closely. All wore dark blue overalls and bore no sign of rank. Each being was between three and four feet in height. The bodies were charred. The investigators surmised that the aliens had died either in space or while in the earth’s atmosphere, possibly as a result of the broken porthole. It appeared the vehicle had landed itself using some kind of automatic pilot mechanism. Scully speculated that perhaps secret radar facilities in the area had been the source of the problem.

In the craft, sheets with indecipherable alien writing were found as well as assorted other strange objects. Scully was told that some of these were pilfered by soldiers as souvenirs.

Since the craft was too large to be transported as it was, it was decided to dismantle it. The disc was broken up into sections and each section transported to Wright Field air base in Ohio on the back of a lorry. There the saucer was extensively analysed, though scientists reportedly learned little of its internal workings.

Later Assessments of the Aztec Tale

While Scully’s book made a splash at the time it was issued, its credibility was quickly called into question when an enterprising reported called J.P. Cahn decided to investigate the claims made in the book for himself. Cahn concluded that Scully’s two principal sources for the book were Silas Newton and Leo Gebauer. Both were colourful characters with a reputation for untruthfulness. In fact, not long afterwards, both were convicted of fraud. It emerged they had been going around claiming to have a device, purportedly recovered from the crashed alien spaceship, which could detect mineral deposits buried deep in the earth. Promising huge returns, they had gathered a lot of money from now-disgruntled investors who had absolutely nothing to show for their investment.For a long time, these revelations seemed to be an arrow through the heart of the Aztec UFO incident. It was dismissed as a hoax, and almost no one took it seriously any more. Frank Scully continued to maintain the essential truth of what he had written, however, even on his deathbed.

Later on, a few curious researchers decided to investigate the Aztec incident for themselves and see whether there was any substance to it. Poring over the scene of the supposed crash, they came across stretches of heavily reinforced concrete which had been poured into the desert sands. They speculated that it been put there to support some of the cranes which would have been involved in the recovery operation. Probing a little deeper, they discovered that, in fact, there were secret radar installations in the area, just as Scully had said. Eventually, they managed to get in contact with witnesses who claimed to have been involved in various aspects of the saucer’s retrieval and analysis. As always with late-breaking witnesses, however, there are doubts about their authenticity.

Though there are many who still consider it a hoax, the Aztec incident has certainly regained some credibility among researchers as a possibly genuine UFO incident. Perhaps Aztec will one day rival its fellow New Mexico town of Roswell as a mecca for UFO enthusiasts.