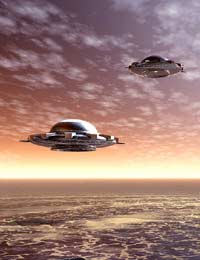 With the public emergence of the saucer phenomenon in the late 1940s came the inevitable crackpots and conmen. Of these, undoubtedly the most colourful was Polish-born, American George Adamski.

Adamski was born in 1891. In the course of his life he held a variety of mostly low-level jobs before working his way up to running his own burger stall in Palomar, California. The burger stall was close to an astronomical observatory and this seemed to turn Adamski’s mind towards things spacey. He bought himself a telescope and, by the late 1940s, claimed to be regularly sighting UFOs.

Things went on like this for a few years until one day, in 1952, while travelling in the desert with some friends, a giant UFO was spotted overhead. Adamski was convinced that the occupants of the craft intended to speak with him. He asked his friends to wait for him while he went to meet them.

Later, an alien appeared and spoke with Adamski using a mixture of gestures, English and telepathy. The male alien was human in appearance, but more blonde and beautiful than most. He was called Orthon and came from the planet Venus. He also wore strange trousers and shoes which left mysterious marks in the sand. The alien communicated to Adamski that there were twelve planets in the solar system, and that all contained enlightened, highly evolved humans like himself. This community Adamski came to refer to as the Space Brothers.

The Space Brothers were apparently concerned that humankind had begun atomic testing on Earth. It was feared that the radiation might somehow leak out through space and cause damage to the Space Brother habitats.

All of this comes from Adamski’s own account of what happened. Parts of the tale were confirmed by some of the other witnesses, though a few later recanted and denied it all.

From this time forward, Adamski claimed to have ongoing contact with the Space Brothers. He developed a coterie of followers which began to assume cult-like qualities. Although he had limited education, they took to calling him “Professor”.

Over time, he constructed a miniature industry around himself and his extra-terrestrial contacts. Raking in some serious cash from the books he co-wrote (though critics said they were ghost-written), he supplemented it with earnings from a newsletter he started and goofy courses in telepathy that he marketed to his followers.

But it was the images that were the pièce de résistance in Adamski’s act. The Space Brothers wouldn’t allow themselves to be photographed, unfortunately, but Adamski did manage to snap some photographs of their scout ships. You can see a few on the website of the George Adamski Foundation.

In the tradition of the great man, they want you to buy the book to see the full thing but, from the website, you can at least get an impression. Do a Google search if you want to see more.

The flying saucers look a bit antiquated – definitely a 1950s conception of what a UFO would look like – and you have to wonder why they bob erratically around the sky so much. But you have to admit – the pictures are pretty good. For the time, they were damn good. Experts still debate about how he did it. Most think the “scout ship” photos were extreme-close-ups of everyday objects, or perhaps models Adamski had constructed himself.

Adamski claimed to have met with various world leaders to pass along the message from the extra-terrestrials. In fact, he did meet with the Dutch queen, Juliana, who was known to have a great interest in fringe subjects. The poor queen found herself pilloried in the press for having agreed to the meeting, however. Adamski supporters also boast of a supposed secret meeting with JFK in Washington D.C. in which the former burger vendor briefed the President on the aliens’ concerns.

In another incident much cherished by Adamski acolytes, he turned up in Rome one day with some followers and announced that he was going to see the Pope. He asked his followers to wait for him, disappeared round the corner and returned half an hour later, claiming to have had a great talk with His Holiness. As proof he showed them a medal he said the Pope had given him. Critics say it was nothing but a souvenir medal he bought from a tourist shop.

Decline and Fall of Adamski

As the years went on, Adamski’s claims became ever more outlandish and his support began to ebb away. He claimed, for example, to have been taken on tours of the solar system by his alien friends. He boasted of landing on Venus and being asked to attend a convention on Saturn. Of course, in Adamski’s day, our knowledge of the solar system was much less highly developed than now. We now know that the planets Adamski claimed were home to flourishing Space Brother Civilisations are, in fact, incapable of supporting human life.

When pictures from a Soviet satellite were released, showing the moon as a barren wasteland, Adamski denounced them as fakes. He said that, by contrast, the reverse side of the moon contained a vibrant Space Brother community, complete with verdant pastures, flowing rivers, and chirruping birds in the trees.

Bitterness soon broke out in the ranks of his followers. Some broke away and denounced him as a fraud. Towards the end of his life he was widely, but not universally, regarded as a hoaxer.

Adamski’s success as a conman is demonstrated by the fact that there are still people who take him seriously today. Even some respected researchers in the UFO field (though admittedly not many), people who are by no means credulous fools, continue to treat Adamski indulgently and to entertain the notion that he might have been the real thing. For this reason, Adamski deserves to be celebrated as the greatest UFO con artist of them all.

Orson Welles and the War of the Worlds
Share Your Story, Join the Discussion or Seek Advice..
Oh, he's a fake alright.I'll never forget sitting down with his book, "Flying Saucers Have Landed" at our kitchen table.I opened to his close-up picture of the flying saucer with it's spherical landing gear, power coil, portholes, etc., and then looked up above the table and saw that it was EXACTLY our light fixture above the table, except he used one colored bulb in his picture and ours were all white.I laughed.I still have the book and take it out to show others every few years as it's such a great story.He's a fake alright.But a funny one....
Steve - 25-Aug-13 @ 4:06 AM
One who dismisses Adamski as a crank simply because of the (SO CALLED) discoveries of our modern false science, mainly based on lies and cover ups, are indeed in a poor state of blindness. It is high time you stop listening to those who blind and enslave you and seek out your true nature and purpose. It is high time to awaken for your dream is becoming a nightmare.
Sir J - 8-Jul-12 @ 6:21 PM
Its very true, I Think with all the space probes to Venus and all the other planets in the Solar System,they have discovered that they far too Hostile too support any life. George Adamski claims too have been taken aboard these craft and been taken to Venus which doesnt have any life because the Temperture is just too high,But I do have one suggestion, what if there is life on all the planets in the Solar System,but they exist on different higher Frequencies,on other energy levels.
dski de anus - 8-Oct-11 @ 12:14 PM
Title:
(never shown)
Firstname:
(never shown)
Surname:
(never shown)
Email:
(never shown)
Nickname:
(shown)
Comment:
Validate: