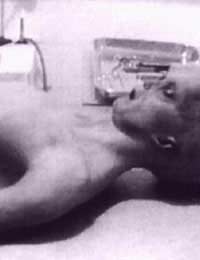 For years, rumours that an alien vehicle had crashed at Roswell New Mexico had circulated in the UFO research community. Alien technology and perhaps even aliens themselves – dead or alive – had been recovered from the crash site, so the story ran.

There had been no definitive proof, however. Belief in the story, by and large, came down to whether or not you believed the eye witnesses who claimed to have seen this or done that. Then, in 1995, on the cinema screen at the Museum of London, the proof emerged. Or so it seemed.

A specially invited audience – which included representatives from all major religions as well as members of the British UFO research community – was treated to a private screening. What they saw astonished them. White-coated men, using surgical instruments, poked and prodded at a corpse on the table in front of them. But this was no ordinary corpse. Its bizarrely shaped limbs and bulbous cranium marked it as not from this earth. As the film continued, the doctors cut open the alien corpse. Blood flowed as the incisions were made. Yucky-looking internal organs could be seen, and, when the giant cranium was cut open, a bulging, crenellated brain was visible inside.

This was the first public glimpse of the film that would shock the world. Promoted by London businessman Ray Santilli, the film was soon snapped up by newspapers and television companies around the world. It was broadcast in prime time in the US, on the Fox TV news channel, unleashing fierce debate about whether or not it was authentic.

Santilli’s story was that he had been travelling in the US, looking for some early Rock ‘n Roll era film footage. While there, he was approached about buying some unrelated film which appeared to show the dissection of an alien corpse as well as some flying saucer debris recovered from the crash at Roswell. Santilli bought the footage and then revealed it to the world. That was his story. The identity of the original cameraman was never revealed. Santilli claimed that he was a former member of the US military who insisted on preserving his anonymity. In the documentary Santilli later released, the cameraman was interviewed briefly with his face blacked out.

In 2006, Santilli confirmed what many people had long suspected: that the Alien Autopsy footage was a hoax. In an episode of the Sky Television documentary series, Eamonn Investigates, Santilli admitted that the supposed autopsy lab was actually a cheap London flat. The impressive-looking alien had been constructed by a local sculptor and those horrifically realistic internal organs had come courtesy of a nearby butcher’s shop. The cameraman? Santilli said he had recruited an old, homeless guy from the streets of Los Angeles, taken him to a hotel, given him a scrub and asked him to play the part. It had all been a giant con job. Santilli had fooled the world. And made a great deal of money in the process. No one knows exactly how much money Santilli and his friends made from the whole venture but it must have been a sizeable sum.

Intriguingly, though Santilli has now admitted the film was faked, he calls it a restoration rather than a hoax. He insists he actually did buy footage of the alien autopsy at Roswell but that film had been degraded by time and most of it crumbled away in his hand. Santilli claimed his film was no more than a recreation of the original. He even said that some of the original footage had survived and had been embedded in the film he released, mixed in with the “recreated” images. There is no proof that this is true and every reason to doubt it. The mystery cameraman, who supposedly took the footage originally, has still not been identified, possibly for the very good reason that he does not exist. Santilli’s claim that there was some original footage and that his film contains some of it may be nothing more than a pre-emptive legal defence should he ever find himself sued for fraud.

Whether you believe that Santilli ever saw any real footage of the aftermath of the Roswell crash, there is no doubt that the whole Alien Autopsy saga is great natural comedy. Its potential was realised by TV personalities Ant and Dec. They released, Alien Autopsy, their first venture into big-screen comedy fiction, with a script that essentially re-tells the Santilli story, in 2006. The Alien Autopsy saga rumbles on.