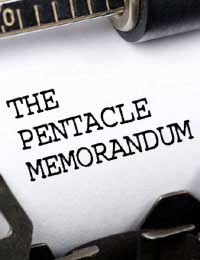 In 1967, while rummaging through the papers of Project Bluebook scientist J. Allen Hynek, UFO researcher Jacques Vallée discovered a document that was to change his whole outlook on the UFO phenomenon. He called it the “Pentacle Memorandum” and when it leaked out in the broader UFO research community years later, it started a debate which continues until this day.

Dated 1953, the document refers to the imminent convening of what came to be called the Robertson panel - a group of expert scientists who had been asked to consider the UFO phenomenon. Remarkably – given that the Robertson panel was being presented to the public as an impartial committee of scientific experts – the author of the Pentacle Memorandum assumes the authority to set the agenda for “what can and cannot be discussed” at the panel’s meeting.

Most strikingly of all, however the Pentacle Memorandum calls for a special, large-scale experiment to be undertaken in a known UFO hotspot. Vast numbers of monitoring and tracking devices were to be installed to give complete coverage of the sky in the target area. Links were to be established with civilian and military air traffic control systems to keep the experiment organisers fully informed about all conventional air traffic. Careful records of weather conditions were also to be kept.

Then, when preparations were complete, “many different types of aerial activity should be secretly and purposefully scheduled within the area”.

Interpretations of the Pentacle Memorandum

What does this mean? Many, including Jacques Vallée, believe it means that the government intended to fake a UFO flap. This is where speculation runs rampant. Some take it to extremes and argue that the Pentacle Memorandum proves that the government was behind the whole UFO phenomenon – that there are no alien spaceships, no extra-terrestrials, nothing but a giant psi-ops scheme perpetrated on the public by the government. But for what possible reason? Again, speculation runs wild. Perhaps to provide cover for secret military projects? Or give the masses something daft to occupy their excess psychological energies and keep them submissive to their governments? Perhaps the threat of alien invasion could even be used to impose martial law at some future date. Or might it have been a propaganda experiment, a test to see how easily people could be fooled into believing something ridiculous?

There are other possible interpretations of the Pentacle Memorandum, however. It could be read as indicating that the government was genuinely puzzled by the UFO reports it was receiving. Suspecting that many or perhaps all, originated in the wrongful identification of normal aircraft, the experiment proposed in the memorandum would have allowed the government to determine whether this was so.

Nor does the phrase “different types of aerial activity should be secretly and purposefully scheduled within the area” necessarily mean that the government intended to operate pseudo-flying saucers to fool the public. It might only refer to conventional aircraft such as aeroplanes, helicopters and balloons. If those aeroplanes, helicopters and balloons then gave rise to UFO reports, that would be interesting data.

However, if objects were seen which could not be accounted for by conventional air traffic or weather phenomena; that too would be interesting data of a different sort. If so, if there were indeed anomalous aircraft in the sky, it might mean that there really were aliens visiting us in spaceships and the government would have to devise an appropriate response.

Set against this innocent interpretation of the memo, however, is the reported reaction of its author when confronted about its contents. When Hynek demanded an explanation, he was rebuffed and told sternly that the memo was never to be discussed publicly under any circumstances.

The Pentacle Memorandum is certainly a remarkable document. Whether the “deep paranoid” interpretation of its contents – that the government is responsible for faking some or all of the UFO phenomenon – is valid, there is no doubt that at least a mild paranoid interpretation of it is. It shows conclusively that what purported to be high-level, objective official inquiries into the UFO phenomenon – Project Bluebook and the Robertson Panel – were in fact dealing with limited information only and being manipulated by a higher power with an agenda of its own.

Majestic 12
Share Your Story, Join the Discussion or Seek Advice..
This is interesting (I'd never heard of it before) but I'm not sure it proves anything, as it can be interpreted in so many different ways. The government was behind it, the government believed their might be UFOs, the government was investigating. We'll probably never know - and it depends on if the document is real or just a fake. It's nice as part of the whole UFO documentation but to think of it as more than that is just intense speculation that really doesn't do any good at all.
bob - 4-Jul-12 @ 12:23 PM
Title:
(never shown)
Firstname:
(never shown)
Surname:
(never shown)
Email:
(never shown)
Nickname:
(shown)
Comment:
Validate: