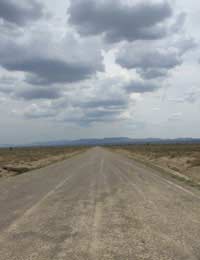 The term "Area 51" is now popularly associated with UFOs but few people know what it actually means. Area 51 - sometimes referred to as Groom Lake or Dreamland - is an area of the Nevada desert, located just north of Las Vegas, which is used by the US military for testing experimental aircraft. The stealth fighters and bombers, and the famous U-2 spy plane, all were seen here before they moved into use by the American military. But, advanced as some of these aircraft may be, some believe the technology present at Area 51 goes way beyond even that.

For years, Area 51 has been linked to the UFO mystery. Much of this derives from the story of one Bob Lazar. Lazar came forward in the 1980s, claiming to be a technician who had worked at Area 51 on a secret project to reverse engineer a UFO. According to his account, Lazar worked on the propulsion system of the flying saucer which was powered by a mysterious compound called "Element 115."

Lazar boasts of having seen a flying disk or flying saucer, approximately 30 feet in diameter, take off in a test flight while under remote control. Internally, the saucer he saw - and he says there were up to eight others, all different - featured no sharp surfaces. Everything was curved. The use of space was inefficient, he says, and the craft was clearly designed for beings smaller than humans, possibly aliens.

The UFO research community has been greatly divided on the issue of whether or not Bob Lazar is credible. Critics say that educational credentials did not check out. But Lazar's supporters insist the authorities have been systematically erasing any paper record which referred to him - so that there would be nothing left to corroborate his story.

Lazar also demonstrated a payslip which contains the intriguing designation E-6722MAJ. This is interesting because it suggests a connection with MAJESTIC-12, or MAJ-12, the secret organisation some believe was created by the US government to deal with all alien and extra-terrestrial-related matters.

Apart from the Lazar story, Area 51 has been linked to a number of UFO rumours and conspiracy theories. Some of those who think the moon landings were faked believe the astronaut footage was filmed, not on the lunar surface, but in a studio built at Area 51. In the 1990s, some interesting video material surfaced. It showed the interrogation of an insectoid-looking alien, and had reportedly been smuggled out of Area 51.

Seeing Area 51 for Yourself

An indication of the importance the US government attaches to preserving secrecy at Area 51 came with Skylab space mission in 1974. The astronauts were going to be taking photographs of the Earth's surface, but were given specific instructions NOT to photograph exactly one place on the entire planet: Area 51. Despite these instructions, whether inadvertently or not, they did photograph the area, setting off an internal debate within the American government about whether or not the images could be made available to the public in the usual way, under Freedom of Information legislation. In the event, they were not. It is extraordinary that this area was regarded as so important, however, and it does tend to buttress, even if only indirectly, many of the conspiracy theories about UFOs and aliens.

Fortunately for us, satellite imagery is now available to the masses. You can see Area 51 for yourself on Google Maps. If you click the Map tab, you'll notice there isn't one! Spooky! Also, the highest zoom level on the satellite image isn't available for some reason. If you zoom in as far as you can go, however, you'll see some aircraft on the landing strips, including what look very much like black helicopters (so the conspiracy theorists were right!). There are even a few strange circular shapes. Round buildings, just shapes on the ground or flying saucers waiting to take off? Have a look and decide for yourself.

Today the area surrounding the Area 51 base is patrolled by US military guards carrying automatic weapons. They are authorised to use deadly force against intruders and are backed up by helicopters and networks of motion sensors buried beneath the ground. Area 51 is part of the much larger Nellis Air Force Range, which is used for testing military aircraft. All but a select few of the test pilots are warned not to enter Area 51's airspace, however. The pilots refer to this super-restricted airspace as "The Box" and, if they do happen to stray into it, can expect to be harshly interrogated and rebuked afterwards. Whatever goes on at Area 51, someone doesn't want us to find out about it.

Area 51 has been at the centre of so many conspiracy theories about UFOs, aliens and flying saucers, you have to wonder: could there be so much smoke without some fire?