Home > UFOs & the Government > Was Space Shuttle Columbia Shot Down by a UFO? 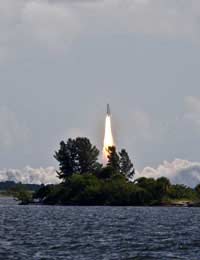 On February 1, 2003, the Space Shuttle Columbia broke up in the skies over Texas as it re-entered the Earth’s atmosphere after a two-week mission. Seven crew members were killed. In the aftermath of the tragedy, as it dominated the headlines, experts trooped onto our television screens to offer explanations of what had happened. A piece of foam had broken off during launch, it was said, and struck a part of the heat shield, damaging it and weakening it. This was the official account of the accident.

Was Space Shuttle Columbia Shot Down?

It came in the form of photographs taken by a private photographer, Peter Goldie, an amateur astronomer and shuttle geek who took several long-exposure shots of the shuttle in the minutes before it exploded. The images show what looks like a jagged purple energy beam corkscrewing down from higher up in the sky towards the shuttle. Whatever the purple energy beam is, it seems to zero in on the shuttle, tracking it across the sky and eventually striking it.

Goldie did not go public with his images, even though he could undoubtedly have made a small fortune by selling the publishing rights to media organisations. Instead, he tried to make contact with NASA itself. At first this proved difficult. Calling the NASA telephone hotline got him nowhere. But eventually, through someone who knew someone, contact was made. NASA then gave him the royal treatment, no doubt trying to bamboozle him with a bit of celebrity glamour, by flying out a former shuttle astronaut to collect the images and his camera from him for analysis.

Reporters from the San Francisco Chronicle, a respectable mainstream American newspaper, were present when the astronaut arrived and wrote a story about it. The photographer was not identified in the story. Goldie refused to release his photographs and insisted on maintaining his anonymity. Despite this, his name became public when he took action against a website which published one of his photographs. Goldie has since taken or threatened action against a number of websites which reproduced his photographs without permission. His behaviour is certainly very strange. Why won’t he allow other people to see the photographs he took? What is he afraid of? It is almost impossible to suppress anything fully on the internet, however, and the intrepid web searcher will come across the images soon enough.

Interpretation of the Peter Goldie Photographs

NASA’s explanation of the Peter Goldie photographs was that the anomalous images resulted from a vibration in the camera. Few of those who had seen the images were able to take this conclusion seriously. The interface point between the purple beam and the plasma trail left by the shuttle, they pointed out, clearly shows some kind of reaction, implying that both existed in the real world and were not simply artefacts within the camera.

Of those who accepted that the purple beam was real, some believed it represented a hitherto unacknowledged natural phenomenon : mega-lightning. Others have claimed it came from an advanced plasma weapon, of a type which can only plausibly have been used by extra-terrestrials. Why would the aliens shoot down a Space Shuttle? The date may be significant : February 1, 2003, shortly before start of the Iraq war. Were the aliens trying to send some kind of message to America about its global belligerence? Some believe that aliens simply will not allow humanity to venture out into space until it can demonstrate to the extra-terrestrial community that it is capable of peaceful and responsible co-existence. Was the Columbia shoot-down, then, a shot across the bows of an arrogant superpower?

Or could the message have been intended for Israel? Columbia was shot down over Palestine, Texas, with Israel’s first astronaut, Ilan Ramon, a colonel in the Israeli air force, on board. Were the aliens trying to tell Israel to improve its treatment of the Palestinians? We are not likely to get an answer any time soon, but these are the kind of exo-political interpretations which continue to swirl around the mysterious Columbia incident.

The history books record that the Columbia disintegrated because of a faulty heat shield. But there will always be those who think that something else happened.
Next Page

Majestic 12
Share Your Story, Join the Discussion or Seek Advice..
Liers? NASA a bunch of liers? NASA = Never A Straight Answer. They just can't help it, the lies. The Apollo moon landings by the known astronauts, Armstrong & friends, is full of great scientific inconsistencies, say, in the photographic record of said event, to mention one of them. I'm not saying that humans, surrogate astronauts not the named ones, did not landed on the Moon. But, I'm still waiting for NASA to explain the different shadow angles in the "official photos" taken on the Moon. The shadows, for example, should all be describing the same angles regarding the objects on the terrain since there is only one light source, the Sun. More than one light source is the only scientific explanation for the diversity of the shadows angles. So, with the Columbia disaster now a great, great mystery, NASA, we are waiting for an explanation, a serious one...not another lie.
Space Gladius - 22-Jul-14 @ 3:24 AM
Well,as the record of nasa's lying, just keeps heaping it on,not too sure if this wasnt a military satelliteor ufo shoot down of the shuttle.happen to know first hand of the spin they like to play.I met John Kline..Nasa Engineer in 1990 and we had a disscusion on Landing craft. One other person was there.A construction worker in A restaurant in Florida,His Design of the airbags that landed the spirit and opportunity worked great but he never got credit for the idea.according to nasa it was an idea of there engineers
skycrane - 7-Jun-14 @ 12:15 AM
Title:
(never shown)
Firstname:
(never shown)
Surname:
(never shown)
Email:
(never shown)
Nickname:
(shown)
Comment:
Validate: