Home > UFOs & the Government > They Were Shot Down by UFOs 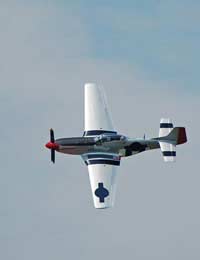 Since just after the end of the second world war, when the possible presence of flying saucers in our skies first entered the public consciousness, there have been many dramatic encounters between our own aircraft and those of the Visitors. Usually, these incidents result in nothing more than a scare for the pilot, a convincing demonstration of how inferior our technology is to theirs, and, if the pilot is courageous enough to admit what he has seen, a written report after the fact. Occasionally, though, events take a much more sinister turn.

On January 7 1948, a flight of four P-51 Mustangs flying over Kentucky was tasked to investigate a nearby UFO sighting. One of the aircraft was low on fuel, however, so returned to base. The other three closed in on the UFO's last reported position. As they did so, they saw it above them and climbed to intercept it. Mustangs were World War II-era propeller-driven aircraft without pressurised cabins, so their pilots had to use oxygen masks when flying at high altitudes. Two of the aircraft were running low on oxygen, though, so they turned back, leaving Captain Thomas Mantell, the flight leader, to chase the UFO alone.

Mantell could clearly see the object above him. He described it as being "metallic" and "of tremendous size". The Mustang continued climbing, reaching ever more dangerous altitudes. The radio operator in the base heard Mantell say, "My God, I can see people in this thing!" Above 25,000 feet no more communication was heard from Mantell. Suddenly, his aircraft was seen plummeting earthwards. An eye witness described it as exploding at around 20,000 feet.

The official air force investigation concluded that Mantell had died as a result of oxygen deprivation while chasing the planet Venus. When it was later calculated that the planet Venus would have been barely above the horizon at the time in question, the explanation was changed to a weather balloon instead.

Mantell's colleagues suspected a cover-up. The radio operator who monitored his transmissions from the base had previously been a UFO sceptic. Now he was a believer.

While researching his book "Shoot Them Down", author Frank Fischino stumbled across something that had been kept quiet for more than fifty years : an air war between humans and aliens that raged ferociously across the skies throughout the year 1952. In that year, US air force pilots were ordered to shoot down UFOs if they refused to land. This appeared to provoke an angry reaction from the UFO occupants. It resulted, Fischino believes, in US aircraft being blasted out of the skies all across the world. Of course, the truth about this was never admitted publicly. Instead, excuses such as training accidents, or running out of fuel, were invented to cover up what was really going on.

The story of Frederick Valentich, a 20 year-old Australian pilot, is one of the most chilling in all the annals of ufology. On the evening of October 21, 1978, Valentich was flying his Cessna aircraft from Melbourne to King's Island. It was a routine flight, made just as darkness was setting in, which was expected to take just over an hour. However, 47 minutes after he took off, Valentich got in touch with Melbourne air traffic control to say that he could see a large aircraft above him. When it passed over him at extraordinary speed, he asked if there were any military aircraft in the vicinity. He was told there were not.

The strange aircraft then seemed to play games with Valentich, zooming past him from first one side then the other. A note of alarm crept into Valentich's voice as he spoke to the air traffic controller. "It's not an aircraft," he said. He described it as having a green light, being "metallic like" and "all shiny on the outside". Soon, the Cessna's engine started to develop difficulties. The UFO vanished for moment then re-appeared, careening towards Valentich from the south-west. Clearly frightened, the young pilot spoke to air traffic control : "That strange aircraft is hovering on top of me again. It is hovering and it's not an aircraft." Those were his last words. After a few more seconds, the air traffic controller heard the microphone go dead. The Cessna never arrived at King's Island. A full-scale search and rescue operation was launched but not a trace of Valentich was ever found.

They Were Shot Down by UFOs - Conclusion

While many UFO believers insist that the visitors are friendly, there is a body of evidence suggesting that this is not always the case. Some pilots got too close for comfort, and were never heard from again.
Next Page