Home > UFOs & the Government > Is There A Government Conspiracy Of Silence About Aliens?

Is There A Government Conspiracy Of Silence About Aliens? 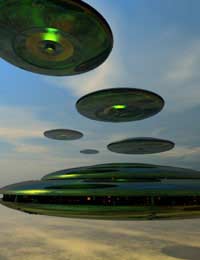 The bedrock of modern ufology is the belief that the government is not telling us everything it knows about UFOs. How did this belief originate? And why is it so widely held?

Do Governments Have Extra-Terrestrial Technology?

Many researchers believe that our governments have acquired extra-terrestrial technology through alien vehicles which have crashed on Earth. The 1947 incident at Roswell New Mexico - in which the US military first admitted it had acquired a "flying disk" from a crash site, and then denied it the next day, insisting that it was only a weather balloon after all - was the starting-point for many of these conspiracy theories of a government cover-up about aliens. Distrust of official explanations took root in the minds of UFO researchers and has flourished ever since then.

Besides secretly acquiring alien technology and keeping quiet about it, some researchers go much further in their belief in a government conspiracy theory. They argue that our governments have established a successful relationship with the ETs. There are persistent stories, for example, that U.S. President Eisenhower actually met an alien ambassador at Edwards Air Force Base in 1954.

A cornerstone of the belief in this deeper conspiracy is the Majestic-12 story. Although it is a complex subject, requiring an article in itself to fully explore, the Majestic-12 story is based on a set of documents which purport to be secret government papers relating to a clandestine organisation - Majestic-12, MJ-12 or sometimes Majic-12 - which was set up in the late 1940s to deal with the reality of extra-terrestrial contact, including carrying out investigations of alien technology and handling, for lack of a better term, "diplomatic relations" with alien beings. Fierce arguments continue to rage about the authenticity of the Majestic-12 documents. What is clear, however, is that if they are a fake, they are an extraordinarily impressive one. A huge amount of time and effort must have gone into researching and preparing them.

Some researchers go yet further in their belief in a government-ET conspiracy theory. And it is here that the speculation begins to take on a more sinister note. They argue that the aliens are, in some way, preying on the human populace. Pointing to the many reports of abduction and experimentation on human subjects, as well as to cattle mutilations, they insist that the ET behaviour is unfriendly and outrageous. But why would our governments continue to maintain a cordial relationship with aliens engaged in such predatory conduct? They are of the opinion that our governments have made some kind of "deal with the Devil," so to speak, in which the extra terrestrials will be allowed to prey on the Earth's population, to a limited extent, in return for handing over the secrets of their technology.

The Insiders On The Conspiracy

Critics of conspiracy theories tend to say that they could not possibly be true because so many people would be involved in the secret operation that at least a few would surely blow the whistle sometime. A government can deny pay, promotion and retirement benefits to the personnel working for it and this can be a powerful inducement to silence. Additionally, many working in the military are sworn to special oaths of secrecy. Breaking these oaths can lead, not just to material loss, but to long terms of imprisonment. Despite all the pressures a government can bring to bear, however, many whistleblowers do exist. It is a myth that no insiders have talked. The UFO literature is replete with examples of people who were formerly members of the military and now talk candidly about how they saw alien spacecraft - on scopes, in the skies, and in government warehouses. Some even claim to have seen aliens themselves - living or dead.

There are engineers such as Bob Lazar who claims to have worked in Area 51 on the reverse engineering of a UFO. Steven Lovekin was a former member of the Army who worked on the White House signalling staff during the Eisenhower administration. He claims to have been shown alien artifacts recovered from the UFO crash at Roswell and to have been told of people who had been "erased" for breaking their silence on the subject. These are only two examples. There are many more.

Are They All Lying About Aliens?

The Disclosure Project is an organisation dedicated to exposing the government's conspiracy of silence about UFOs. It has collected testimony from hundreds of witnesses, for the most part former government employees, who are willing to go on record and testify under oath about their knowledge of UFOs. The leader of the project, Steven Greer, believes that ET technology, when brought to light, may provide an answer to some of humanity's greatest problems - such as global warming and the depletion of the Earth's energy resources.

An overwhelming majority of researchers in the field of ufology believe that our governments are concealing the truth about what they know. Pressure for full disclosure has continued to grow and UFO-related documents are among the most frequently requested under "Freedom of Information" legislation. As a result, in early 2007, both the French and British governments announced that they intended to make their UFO files fully accessible via special websites. Whether these promises of full disclosure will be fulfilled, and whether other governments will follow their example, remains to be seen. The conspiracy theory continues...