Home > Interpretations of UFOs > The Hollow Earth Theory And Aliens 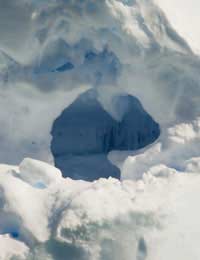 The view that UFOs represent the vehicles of an advanced alien race emanating from another world (the so-called Extra-Terrestrial Hypothesis or ETH), is the one most commonly encountered in connection with the phenomenon. But there are alternatives. One is that the ETs are not ETs at all, and there are no flying saucers as such, but that, like us, they dwell on the Earth - not on its surface, but deep inside. This interpretation often goes hand in hand with the Hollow Earth theory. Considered exotic or even absurd by most ufologists, and therefore representing, in a sense, the fringe of a fringe, it is a view that is nonetheless worth exploring.

According to the Hollow Earth hypothesis, the Earth contains a world within a world.

At its centre is a miniature Sun. Inhabitants of the hollow earth look up to it much as we look up to our own sun. The hollow earth contains, not dark, musty caverns, or magma-filled tunnels, but green landscapes and flowing rivers, just as we see on the surface.

Brinsley Le Poer Trench, the 8th Earl of Clancarty, who used his seat in the House of Lords to advance serious discussion of the UFO subject, was probably the major exponent in the UFO research community of the view that UFOs came from deep inside our own world, rather than another. In his book "Secret of the Ages: UFOs from Inside the Earth," he lays out the case. Le Poer Trench believed that the beings inside the Earth were the remnant of a super-powerful civilisation which had once existed on the legendary lost continent of Atlantis. As global cataclysm threatened, one which would eventually see Atlantis sink beneath the waves, some fragment of that society fled as refugees to live within the bowels of the inner Earth.

The Case For A Hollow Earth

Most Hollow Earth theorists, including Le Poer Trench, attach great importance to the polar expeditions of the American explorer, Admiral Richard E. Byrd. They believe that the Earth contains openings at both the North and South Pole which descend into a hollow world within; that, around these openings, there are green oases of lush vegetable and animal life (including possibly living "prehistoric" creatures such as mammoths) amid the ice in the polar regions; and that Byrd stumbled across these regions in his journeys of exploration between the 1920s and 1950s, accurately reported on them, and then had the truth covered up by his own and other governments who were concerned about letting this knowledge slip out to their people. Several people have claimed that, in the late 1920s, they saw cinematic newsreels of Byrd's expedition, which included film taken of these Antarctic oases, but that the footage has since been lost.

In certain places, at various times, some people have claimed to hear a distinct humming sound in their head which sits on the fringe of their awareness but which, nonetheless, can be extremely irritating to them. Not everyone hears the sound, but those who do are deeply affected by it, and there have even been cases of people committing suicide after being driven mad by the incessant hum. People hearing the sound are often found within the same general locale, suggesting that they are not making the whole thing up. These strange hums have been reported in several places in the UK, most famously in Bristol as the "Bristol Hum." Internationally, the "Taos Hum" from Taos, New Mexico, in the United States, is probably the best known. Hollow Earth theorists speculate that the humming sound comes from advanced machinery used by the race of "Others" or aliens deep within the Earth.

Proponents of a Hollow Earth make much of certain satellite photographs of the planet which were released by NASA. These appear to show a crater-like dark aperture in the centre of the Earth. However, critics insist that the photographs referred to are composites, created by layering multiple photographs together, and that the dark area in the centre is nothing more than an area which happened not to be illuminated by daylight at the time the images were taken.

Who Are The Aliens Within The Hollow Earth?

Among Hollow Earth believers, opinions differ about the nature of the beings inside the Earth, and their attitude towards us. Some are convinced that these "inner Earth aliens" are benevolent Atlanteans who are much like us in appearance, but who may be concerned that some of our technological developments might pose a threat to their way of life; others insist that the Inner Earthers are degenerate lizard creatures of malicious intent who are plotting some kind of takeover of the surface world. The view that there are multiple ET races or factions within the inner world is also encountered.

So What Do We Make Of A Hollow Earth?

The Hollow Earth theory is now heard rarely. There are still those who believe in it passionately, however, and some even have plans afoot to undertake polar expeditions of their own to find out the truth once and for all!

Could Those Aliens Really Be Demons Or Devils?
Share Your Story, Join the Discussion or Seek Advice..
[Add a Comment]
@John - thanks for this. This sounds a really interesting book I'll seek it out.
Jase - 31-Aug-17 @ 10:03 AM
There is a book called "The Land of No Horizon" explaining why a planet being hollow makes much more sense than a planet whose center is much more dense than its crust. If planets are really formed slowly out of dust particles coalescing unbder gravity for millions of years, then it's much more logical they would form hollow planets. Center of the Earth cannot be ultra dense, because in the exact center gravity pulls from all opposite directions, so there cannot be any pressure leading to ultra-dense matter.
John - 30-Aug-17 @ 10:05 AM
Id like to share what i seen in our skysover wythenshawe near the airport 2001 it was abt 8 pm and i was bringing the washing in as looked up i saw abt 9 triangle objects flying in a triangle formation..each one was glowing pale orangy brown. the end one was flying to the front then to the back of the formation there was no sound and the were defo not geese ..i went to ring my dad from my moblie to get him to look out his window and my phone baterie was dead i ran to the front but could no longer see them ...they were in my site for abt 3 min and my phone came back on after they disapeared...not sure if they were ufo s or some new type of plane for the air force
Colly - 22-May-16 @ 8:20 PM
I found an opening in a granite wall that pretty much is at least 300 feet high way up in the mountians of utah. This small opening is behind a large tree, You would never know it was there unless you went behind the tree as i did to collect pine cones at its base. This tree is a pondarosa very large and very high. The crack in the granite wall opened up into a large cavern, And i could see day light coming in from another side deep in the cavern, I entered in this cavern and followed the light to where it was coming from which was at least 120 feet across and i came out into a small valley which had a waterfall and the valley was surrounded by granite walls above and beyound 300 feet, There was a small forest and a stream of water running though the valley floor, I walked around a little bit and could not find any traces of humans ever being there. There were medows, Water, And forest.All surrounded by high granite walls. This place i have kept in my memory for over 25years. It takes a good 6 to 7 hours to hike up to this place in utah. I just wanted to inform you that yes there are many things in life and places that are hidden, I used to be an animal tracker and got into nature alot and have seen alot of things that defie reason. As far as ailens are concerned i have seen 1 space ship in all my days up close and personal. You never really talk about such things because most will think your lost. I was reading about the hollow earth story thats why i wanted to add my take to all this. Have a nice day Thomas
justme - 23-Jun-12 @ 3:56 AM
Hi great site. But why is it that ,always there's a great first few lines describing a saucer or UFO only to open it to be disapointed every single time. Over the years it has always been the same. Nothing at all of positive proof of true ufos. Come on give us all Good proof. Tony
big. t - 25-Sep-11 @ 12:22 PM
Title:
(never shown)
Firstname:
(never shown)
Surname:
(never shown)
Email:
(never shown)
Nickname:
(shown)
Comment:
Validate: