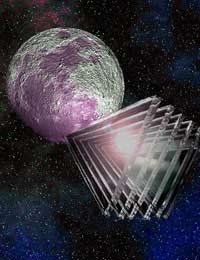 The Tehran UFO case of 1976 is considered by many ufologists to be one of the best ever. It featured multiple eye witnesses, many of them military personnel; radar confirmation of the visual sightings; and a demonstable impact of the UFO on its environment. Unusually for a UFO incident, we also have a comprehensive written report on it from military sources, one that was circulated, moreover, to the CIA, the DIA and even the White House.

The extraordinary events took place on September 19, 1976. The Iranian military received several phone calls from members of the public complaining about a strange light which they had seen flitting about the sky above their homes. They were told not to worry, that it was probably just a star. When not long later, miltary observers reported the same thing, however, a jet aircraft was scrambled to investigate.

Iran was then ruled by the Shah. It maintained good relations with the West and its military was largely equipped with American technology. So the aircraft in question was a Phantom F-4 jet. As the jet approached the area where the contact had been reported, the object was immediately and easily visible. It was so bright that it could be seen from 70 miles away, flashing through a sequence of red, green and blue lights, arranged in the shape of a rectangle. When the aircraft got within 25 miles, however, all of its instruments and communication systems malfunctioned. The pilot broke off his intercept course and turned around. After he had got some distance away, his equipment began functioning normally again.

A Second Aircraft Attempts to Intercept the UFO

Another F-4 was scrambled and ordered to investigate. It too saw the object and approached it. As it drew close, however, the UFO reacted, matching speed with the interceptor and moving in the opposite direction. The Phantom continued its pursuit. Soon a small bright object emerged from the UFO and zeroed in on the aeroplane.

Frightened, the pilot attempted to fire a missile at it, but, as he did so, his instruments stopped functioning. Thinking he was under attack, he took evasive action, turning into a steep dive. The second object swerved down with him, then broke off and turned away, returning to the first object and re-integrating with it. Relieved to still be alive, the crew of the F-4 watched in amazement as a third bright object emerged from the UFO and plummeted earthwards. It seemed to strike the ground below but the expected explosion failed to materialise.

After that the F-4 aircraft headed back to base but found itself pursued by the UFO moving at between 2000 and 3000 miles per hour. Panicking, the pilot said over the radio that he thought it was going to collide with him, but, instead, it moved past and then away, speeding out over the Mediterranean ocean.

Partial corroboration of the encounter came from a passenger airliner which was in the same area not long afterwards and also reported a loss of instrument function. And later that day, a mysterious luminous object was spotted in the skies over Morocco and Portugal. Could it have been the same craft? Although the ground was searched the next day, no trace of the object that fell to earth could be found. But the local villagers talked excitedly of the light show they had seen in the sky.

All of the Iranian military personnel involved in the incident became convinced UFO believers following their experience. Even today they unanimously express the view that the object they saw can only have been of extra-terrestrial origin.