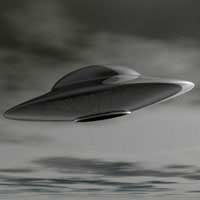 In Queensland, Australia, near the town of Tully, on January 19 1966, 28 year-old farm worker George Pedley was working the fields with his tractor. Thinking he had detected a problem with the tractor's engine, he bent down to listen to it more closely. Just then, as he heard a sharp hissing sound, he looked up and was startled to see a disc-shaped object lifting off from the nearby Horseshoe Lagoon. The mystery craft ascended 30 feet into the air and then sped off, dipping slightly as it passed beneath the trees. Pedley later described the disc as metallic in appearance, about 25 feet wide, with no visible portholes and no sign of any occupants.

When the saucer had gone, Pedley went to look at the lagoon from where it had apparently taken off. The water in the lagoon was about six feet deep. Long reeds grew from within it. On reaching the water's edge, Pedley was amazed to see a circular depression - about 30 feet wide - left in flattened reeds on the surface. The indentation was not flat and uniform but had sloping edges as you would expect to see if a concave shape, like the bottom of a saucer, had impacted upon it. Pedley was all the more amazed to see this because he had passed close by this part of the lagoon only a few hours before and everything then had looked perfectly normal.

Overwhelmed by what he had seen, Pedley went to tell his employer - the land's owner, Albert Pennisi - all about it. Interestingly, on returning to his tractor, Pedley found that its motor had stopped and he needed to restart it. Interference with electrical equipment has often been noted in connection with the UFO phenomenon.

After Pedley informed Pennisi about what had happened, the two men returned to the lagoon and took a number of photographs of the strange indentation in the reed bed. Poring over the whole area, they found something else that was extremely curious : a trail of small teardrop-shaped marks in the ground around the lagoon, leading from the surrounding trees into the water. Could these have been alien footprints?

Authorities were contacted and, before long, the press had picked up the scent too. The story became a media sensation. Much of the coverage was mocking in tone.

Over the next few days and weeks scores of uninvited strangers turned up on the Pennisi property to have a look for themselves. Unfortunately, this chaotic press of people resulted in the suspected alien footprints being entirely erased.

Several other circular indentations were found in the Horseshoe Lagoon in the weeks to come. These varied in size. Some were only a few feet wide. Of course, with all the publicity that had been generated and the crowds that had shown up on the scene, it was far harder to be sure of their authenticity.

Speculation raged about non-extra-terrestrial explanations for the Tully Saucer Nest. Some suggested that perhaps the downdraft of a helicopter's rotor was responsible. The Royal Australian Air Force (RAAF), however, pointed out that their helicopters tended to leave anti-clockwise impressions in crops while the depression in the lagoon clearly swirled round in a clockwise direction. A local weather phenomenon known as a "willy willy", a kind of wind vortex, was also put forward as a possible cause. Pedley and Pennisi, both used to the vagaries of the local landscape and weather, scoffed at this suggestion.

The Tully UFO Incident in Perspective

Although, thanks to their experience, the Pennisi family had become extremely wary of contact with the media, they continued to have UFO encounters on their land for years to come. Indeed Tully in general became a focal point for UFO activity in Australia until well into the 1970s.

In a sense, the Tully Saucer Nest was the first modern crop circle. Indeed, some believe it formed the foundation for the crop circle phenomenon which was to emerge in the 1980s. One of the two hoaxers, the notorious Doug and Dave pair, who claimed to have started the whole crop circle movement with a plank of wood after a night's drinking session down at the pub, had been in Australia at the time of the Tully UFO incident. The media furore it inspired lingered in his mind.

Still unexplained, the Tully incident remains one of Australia's key UFO encounters and one of the best physical trace UFO cases anywhere.
Next Page