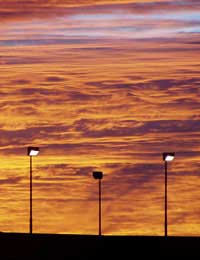 Just when you thought all the great UFO cases were in the past, just when you thought the mainstream media had lost interest in the UFO subject completely, along comes an incident to convince you that the mystery is still with us and not going away any time soon.

On Novermber 7 2006, a baggage handler at Chicago's O'Hare International airport spotted something strange hovering in the sky overhead. It appeared to be dark and disc-shaped and sat there unmoving, just beneath the cloud bank. Word spread quickly around the airport. Soon pilots were peering out of their cockpit windows, air traffic controllers were fielding queries about it, and internal office staff were running outside to have a look.

From a purely professional point of view, of course, this made perfect sense. After all, if the object had been a balloon or other conventional form of aircraft, it could have constituted a hazard to the air traffic coming in and out of the airport. But all the witnesses unanimously agreed that what was hovering in the sky that day was no balloon, or man-made aircraft of any sort. It remained dark and unmoving in the sky for several minutes.

Suddenly, watched by dozens of witnesses, it shot up into the cloud bank above it, moving at great speed and leaving visible a gaping hole where it had punched through the clouds. After a few minutes, the witnesses say, the hole closed up.

So, with such a bizarre incident in such a public place in front of so many witnesses, many of whom were highly responsible professionals, this had to be some kind of major breathrough as far as public acceptance of the reality of UFOs is concerned, right? Surely they would all be on television the next night, telling everyone about what they had seen? Nope. Of course, with UFO stories, it's never that simple.

No great UFO story is complete without a cover-up and Chicago O'Hare didn't disappoint. Many of the witnesses worked for the American airline United Airlines. They dutifully reported what they had seen to their line managers. In response, they were told to shut up and discuss the incident with no one. Fearful of losing their jobs, the airport witnesses, by and large, complied. At least, the warnings had made them reluctant to go public with what they had seen. But they spoke about it privately.

Soon word spread to journalists who started nosing around. A reporter for the Chicago Tribune called up United Airlines and asked about the incident. United said it knew nothing about it. When the paper made inquiries of the FAA - the Federal Aviation Administration, the American agency responsible for tracking air traffic in the country - it disclaimed any knowledge. So the newspaper filed a Freedom of Information act request and, lo and behold, got back records which showed United Airlines managers talking about the incident with the FAA, asking if anything strange had been picked up on radar at the time and place in question. So both organisations knew about the UFO incident, despite their denials. A cover-up was in effect. When challenged, the FAA said that what the witnesses had seen might have been a "weather phenomenon".

Images of the O'Hare UFO

People often take cameras with them when they're going on holiday. So, with something so extraordinary occurring in an airport, you'd have good reason to hope that some great photographs might have been taken. Disappointingly, though, only a few have surfaced so far. They are certainly intriguing and show a dark disc hovering in the sky above the airport. As always with UFO photographs, however, particularly modern ones, questions arise about whether or not they've been photo-shopped.

No compelling video footage has yet surfaced in relation to the incident. There are strong rumours that some exists, though, and that it has come into the possession of Dan Aykroyd, the form ghost-buster who has become well-known for his interest in the UFO subject. Aykroyd has made a number of documentaries about UFOs in the past and will undoubtedly release more in the future. Hopefully, the world will one day get to see great images of the O'Hare airport UFO in one of those.

The Chicago Tribune's article about the O'Hare incident broke all records for traffic to the company's website. Other news organisations which covered the story were amazed at how much public interest it generated. The O'Hare incident demonstrates that the UFO mystery is still with us and that people are still intrigued by it.