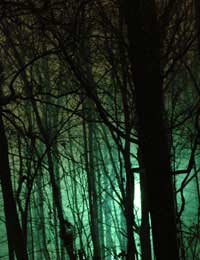 Kecksburg is one of the classic UFO cases. Indeed, some have called it the Eastern Roswell. The incident occurred on December 9, 1965.

Many people across the north-eastern United States and in southern Canada reported seeing a giant fireball streaking across the sky. It plunged earthwards in Kecksburg, Pennsylvania. A meteor perhaps? Perhaps. But some who witnessed its final descent insisted it manoeuvred violently, twisting and changing direction several times before crashing into the Kecksburg woods.Word spread quickly. Radio stations broadcast the news. Local people were swiftly on the scene, swarming the woods, trying to get a look. Unfortunately for those curiosity seekers, the armed forces, backup up by the state police, were quickly on the scene too. They stood guard around the crash site and turned away anyone who got too close. A few intrepid locals had beaten them to the spot, however, and managed to get a glimpse before the authorities arrived. Eye-witness descriptions recall a bell or acorn-shaped large metal object, about 6 feet by 15 feet, half-buried in a crater on the ground. Strange writing, resembling Egyptian hieroglyphs, snaked along the surface of the object. The metal had no folds or apertures, although, in one spot, it showed a slight indentation.Soon the authorities arrived and dispersed those who had gathered, warning them not to talk about what they had seen. Later a large object under a tarpaulin was seen being hauled away in a flat-bed truck.At one point during the night's events, a spokesman for the state police, flanked by members of the military, issued a statement, claiming that the police had searched the area and were convinced that there was "nothing whatsoever in the woods". This was to be the beginning of the official stonewalling on the incident which has continued until the present day. On the day after the crash, the air force proclaimed that the object sighted in the skies was nothing more than a meteor.

If we discount the official mantra of "nothing to see here, move along", what explanations are there for what happened at Kecksburg? It is, of course, possible that what crashed was nothing but a meteor. But the eye-witness reports of a smooth metal object covered in symbols would seem to discount that. And why would the government be so anxious to cover up a mere meteor?Only three interpretations are consistent with all the known facts : what crashed in Kecksburg was either American technology, Soviet technology or alien technology.

The strongest case made by those who reject the extra-terrestrial hypothesis is that what crashed at Kecksburg was the Soviet satellite Kosmos 96. Kosmos 96 was reported to have crashed in Canada almost half a day before. Those who would connect it with the Kecksburg incident, however, argue that perhaps what crashed in Canada was only a disposable part of the Soviet space vehicle, and that the actual satellite module came down in Kecksburg slightly later.

Why the cover-up in this case? The argument runs that the Americans wanted to examine the Soviet technology embodied in the satellite but, under international agreements, would have been required to return the module to its country of origin. Hence the cover-up. Certainly, the shape of the object on the ground at Kecksburg, as described, would have resembled that of the Soviet space module. Both NASA and the Soviet space authorities dismiss this possible explanation, though. What about the manoeuvring seen by some observers before the object crashed? The Kosmos 96 probe was designed originally to explore the planet Venus, so it may well have been equipped with some manoeuvring capacity.

The obvious alternatives to the Soviet space probe explanation are that the object represented secret American technology, or that it was extra-terrestrial in origin. In either scenario, a cover-up is all too easy to imagine.

The years have not diminished interest in the Kecksburg incident. UFO aficionados have continued to bombard various branches of the American government with requests for information and documents. Fascinatingly, only a few years ago, in response to these requests, NASA was forced to admit, after decades of denying it, that, in fact, it had examined fragments of an object that had been recovered from the Kecksburg woods. The space agency declared that the fragments appeared to come from a Russian satellite, but that it had lost all documents relating to the incident.

As is often the case, the Kecksburg tale has grown in the telling. As the incident has acquired a higher public profile through the broadcast of a number of television documentaries, new witnesses have come forward, embellishing some aspects of the original story. Some say they saw a hand emerge from the crashed object; others that they heard an unearthly scream sounding through the woods; another declares he saw a lizard-like arm protrude from beneath a tarpaulin at Wright-Patterson air force base shortly after the crash. Of course, it is never easy to evaluate these belated claims. Are these genuine eye-witnesses who were too frightened to come forward until the incident acquired a high public profile, self-deluded fantasists, or hoaxers motivated by greed or a sense of mischief?

Forty years on, Kecksburg remains an enigma. The NASA declaration proves that something did indeed fall to earth there. Whether it was a Soviet space probe, or something from much further afield, must remain the subject of intrigued speculation.