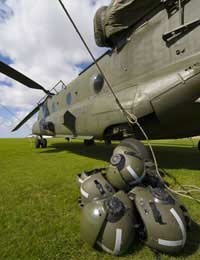 Americans are known for their litigiousness so it was surely only a matter of time before a UFO incident ended up in court, and so it did in the Cash-Landrum case, also known as the Piney Woods Incident.

The key events occurred on December 29, 1980. Betty Cash, 51, her friend and employee Vickie Landrum, 57, and Vickie's 7 year-old grandson, Colby, were returning home by car at night through the Piney Woods in Texas. A bright light glimmered through the trees but, at first, they dismissed it as an aircraft travelling to or from the nearby airport.

As they rounded a corner, however, they were amazed to see the same light right in front of them on the road, blocking their way. Flabbergasted, they saw that the light radiated from a large diamond-shaped object which was heaving unsteadily in the air just above the earth. Flames seemed to be dripping from the object and they could feel the intense heat it gave off even inside their car. Getting out to take a closer look, they were again shocked by the severity of the heat.

The object seemed to be in difficulty, dipping down towards the ground, then shooting back up again momentarily when the flames spurted out from underneath it, as if part of some kind of exhaust. Strange bleep sounds came from the object occasionally too. Vikki Landrum was a devout Christian and thought the object might be God, come to deliver Judgement on the wicked world.

As the burning sensation caused by the object began to seem almost intolerable, suddenly the air was swarming with helicopters. Cash noted different kinds, some with one rotor on top, some with two, like military Chinooks. The object seemed to react to the presence of the helicopters. It lurched higher into the air, still sputtering flames, and sped away over the treetops, the helicopters in pursuit.Shocked by what had happened, Betty Cash and her friend tried to pull themselves together. The presence of the object had super-heated all metals in the vicinity. Cash felt her ring burning into her finger. She could barely open the car door because the handle was so hot. Eventually, they got the car started and began to make the journey home. On the way, they once again caught sight of the fiery UFO, still chased by a flock of helicopters, like courtiers following a mad king.

That was only the beginning of their nightmare, however. The next morning all of the people who had been in the car were severely ill. Clumps of hair were falling out; skin was peeling. They checked into a hospital and were treated as burns victims. Unfortunately, the medical problems did not go away. Their exposure that night had permanent effects. Betty Cash's life became a constant torture. She was forced to sell the businesses she owned, unable to manage them any longer because of chronic ill health.

The Cash-Landrum Case in Court

Reflecting on the incident, it seemed certain to Betty Cash that, because of the presence of the helicopters, the government must have had some involvement. Local bases were contacted, yet all denied having anything to do with it. Angry about the disruption it had brought to her life, Betty Cash decided to take legal action. She contacted a lawyer and together they sued the US government for $20 million. The case wended its way through the courts for some years. High level personnel from the military services and NASA appeared and testified that the US government had no fiery diamond-shaped aircraft in its arsenal. In the end, perhaps inevitably, the case was dismissed.

The investigation conducted in support of the litigation, though, brought welcome publicity and corroboration of the initial story. More witnesses were discovered. Some had seen the object itself and some only the helicopters, but it all served to bolster Betty and Vickie's credibility.

Perspectives on the Cash-Landrum Case

Assuming that the witnesses were credible, and few ever doubted their sincerity, what are we to make of the object itself? In all the annals of UFO literature, there are few diamond-shaped objects to be found. Was it of alien origin or was it a secret government project? Perhaps both. Some have suggested that the object was a less than completely successful attempt to back-engineer alien technology, or even to fly a captured UFO. Certainly, the presence of the helicopters strongly suggests that the US government knows far more than it has ever publicly revealed about UFOs; that it is either in cahoots with the aliens or has somehow acquired technology from them. The only alternative explanation is that the object was a development of purely indigenous terrestrial technology, a black project. Yet nothing like it is known to exist.

One curious encounter may help shed light on possible interpretations. The year following the incident, Vickie Landrum and her grandson saw a CH-47 Chinook, exactly like the ones they had seen that night, land at a local airfield. They approached the helicopter and Vickie started chatting to the pilot. As the conversation went on, Vickie casually raised the subject of the diamond-shaped UFO. The pilot told her that he had been there that night, tasked with "checking on a UFO in trouble". When she informed him that she had seen it herself, and had even been burned by it, he became uneasy and would say no more.

The Cash-Landrum case is one of the most compelling UFO incidents on record. No one has ever put a dent in the credibility of the witnesses, and the burns and scars they bore for the rest of their lives served as a permanent testimony to their extraordinary experience.