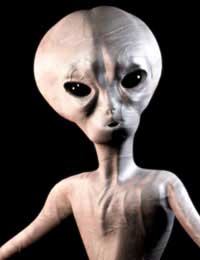 One of the most intriguing questions that supporters of the extra-terrestrial interpretation of the UFO phenomenon are forced to grapple with is why, if aliens are visiting our planet, they don't make open contact. Why not park a flying saucer in Downing Street or land a spaceship in front of the Eiffel tower?

Some sceptics seize on this question scornfully as if the lack of any good answer to it proved that the whole UFO phenomenon was bunk, the product of either fraud or fantasy. Ufologists retort, however, that there are perfectly good reasons why the aliens might want to keep their presence secret.

One speculation is that the aliens have some kind of moral code which prevents them from large scale interference in the affairs of a less advanced civilisation. This would resemble the Prime Directive of Star Trek, the rule that forbade Starfleet vessels from altering the natural development trajectory of planets which had not yet attained high-level technology of their own.

Over the sixty years or so in which the notion that we are being visited by aliens has been widely disseminated, various individuals have claimed to have been specially anointed by the aliens to carry their message to mankind. George Adamski was one, a former hamburger stall operator who carved out a new life for himself as a quasi-cult leader; Billy Meier, the one-armed Swiss farmer who claims to be regularly visited by the Plejaren, a race of super-advanced humans from elsewhere in the Galaxy, is another.

Certainly for these people, the question which forms the basis of this article is rather crushing. If the aliens want to impart some message to us, surely it would be better to do it publicly rather than confiding it to a private individual? The usual response of the purported alien contactees is that the human race is yet not ready for open contact with the extra-terrestrials because our level of spiritual consciousness is too low. Only the contactees themselves have somehow attained the spiritual understanding necessary to fully appreciate the alien message. This is exactly what Billy Meier says he was told. He was asked to convey warnings and prophecies to mankind from the aliens and try and bring about a general spiritual awakening.

The most sinister answer to the question of why the aliens don't make open contact is that they are not well-disposed towards us. After all, if your intentions are hostile, why announce your presence? Knowledge of it could only inspire resistance in the target population and complicate the achievement of your goals. But what are those goals? Some UFO researchers believe the aliens are here to harvest human genetic material, possibly for the purpose of creating alien-human hybrids.

Conspiracy theorists go further. They insist a "deal with the devil" has been made, a secret agreement between the aliens and our own governments which would allow the ETs to prey, to a limited extent, on the human populace in return for sharing some of the secrets of their technology. If so, it seems a curious arrangement. After all, if our governments started openly using alien technology, surely some questions would be asked? Where did you get that flying saucer, Mr. Prime Minister?

The deal, if it exists, then, would mean that our governments have advanced alien technology which they cannot openly use. Why would they enter into such an agreement? Perhaps the Cold War tempted them. Warehousing alien super-weapons which could be rolled out in the event of a Third World War might have seemed an attractive idea at the time.

Aliens From The Future

A variant of the genetic harvesting hypothesis, but this time a benevolent one, is that the aliens are from the future. Perhaps they're not even aliens at all, just highly evolved humans. According to this interpretation, our mysterious visitors know that something terrible is about to happen to Earth and want to preserve a record of our biology, perhaps so it can be recreated elsewhere. Or maybe they will one day rekindle life on Earth if we somehow manage to wipe it out ourselves, by fighting a nuclear war, for example.

But if the aliens know something bad is going to happen, why not intervene to stop it or at least warn us in advance? Maybe they're not allowed to interfere, or maybe they know it's already too late. What could the catastrophe be? Global warming, perhaps, or a giant asteroid about to hit us in 30 years. Who knows?

As you can see there is a wide range of speculation about why extra-terrestrial visitors might choose to shun open contact with the Earth's population. Some suggestions are more plausible than others but, taken together, they convincingly refute the view of some sceptics that UFOs can't be real just because the aliens don't land and say "Hello".
Next Page