Home > Alien Contact > Have You Been Abducted By Aliens?

Have You Been Abducted By Aliens? 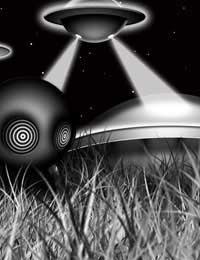 Have you been abducted by aliens? The question sounds absurd. Surely it could only be meant as a joke. Yet, there are those who believe that a vast number of us - millions of people across the world - have been abducted by aliens without knowing it. What’s more, there is some serious research data to back up their claim.

The notion that some of us are being abducted by aliens has come to dominate modern ufology. It all started with Betty and Barney Hill – the first high-profile alien abduction case of the modern era. Its characteristics have since been reproduced in numerous other accounts from fellow “experiencers,” to adopt a phrase favoured by John Mack, one of the most thoughtful researchers ever to have looked at the phenomenon. The key ingredients of the typical abduction account are:

The memory loss is crucial. Typically, memories are only recovered during hypnosis, although sometimes fragmentary recollections occur during nightmares – which many abductees experience with unusual frequency.

For a time, there were some in the UFO research community who argued that some kind of alien experimentation programme was taking place on a large scale – that perhaps thousands or even millions of people were involved. Even in a community which is not averse to conspiracy theories, this sounded like a conspiracy theory too far. Then came Robert Bigelow.

Robert Bigelow is an American billionaire. If you want to get a picture of just how rich he is, think of this – he owns his own spaceship: Genesis I. It’s the only private spaceship in space. Bigelow had a long-standing interest in UFOs and, after making his money in property investment, he began to throw some of it into some unusual fields of research.

One project Bigelow financed was an attempt to find out just how many people may have been the victims of alien abduction. Questions were inserted into market research surveys designed to elicit this information. People were not asked directly whether they had been abducted by aliens. Instead, the questions were subtle and asked about more limited things which were consistent with the alien abduction experience.

The key questions were:

It should be pointed out that the questions themselves were developed in close consultation with Budd Hopkins, one of the leading researchers of the alien abduction phenomenon and that the actual polling was conducted by the Roper Organisation, a highly respected market research company.

If the methodology of the survey was sound and the questions chosen were accurately reflective of an underlying experience, it would appear that almost 2% of the U.S. population – around 5 million people – had been the victims of alien abduction.

Critics retort that the questions were too oblique to be indicative of anything. Supporters insist that direct questions would have been less useful because of the “missing memory” problem and because some respondents might have been too embarrassed to say directly that they had been abducted by aliens.

No similar surveys have been undertaken for the UK, but if the numbers were comparable, it would mean that around 1 million Britons had been kidnapped by aliens. Could this possibly be true?