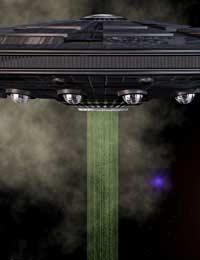 Sceptics like to portray believers in UFOs as fringe figures low-credibility wackos who lack the will or brainpower to conduct the serious research needed to back up their extraordinary claims. When a major intellectual, whose credentials have already been established in other spheres, turns to research on UFOs and concludes that something very real is going on, it tends to rock the sceptics a little. John Mack did exactly that.

John Mack – From Sceptic to Believer

A professor of psychiatry at Harvard Medical School, and the author of a Pulitzer prize-winning biography of T. E. Lawrence (better known as Lawrence of Arabia); Mack had already achieved distinction within his chosen field. In his 60s, he turned to research into more esoteric subject matter: the phenomenon of alien abductions. Thinking at first that it must be the manifestation of some bizarre psychological syndrome, Mack’s investigation convinced him otherwise. He interviewed between 100 and 200 people who claimed that they had been abducted by aliens, and conducted hypnotic regression sessions with many of them. His research convinced him that the phenomenon was real: that these people really were being contacted, taken against their will, and experimented on by some kind of non-human being.

Mack published the results of his researches in two books, “Abduction: Human Encounters with Aliens” and “Passport to the Cosmos: Human Transformation and Alien Encounters.” The books became best-sellers and Mack enjoyed a new celebrity on the television talk-show circuit. In these books, Mack discussed the commonalities he had found in the abduction experience. Many of the “experiences,” as he called them were being warned by the aliens of grave danger to the Earth itself arising through mankind’s ecological rampage. Tongue only slightly in cheek; he came to refer to the alien contact phenomenon as “a cosmic outreach programme for the spiritually-impaired.” He also noted that the phenomenon was a worldwide one, and not confined to the United States as was often mistakenly believed. Conversing with shamans from primitive African tribes, he heard reports of encounters which almost exactly resembled the classic Western abduction experience.

Mack increasingly came to see the Western scientific paradigm as inadequate to fully explain the mysteries of the cosmos. Likewise, he felt that those who interpreted alien encounters, even sympathetically, as some kind of internal psychological process, a spiritual shamanic journey so to speak, were missing something too. Mack became convinced that something very real was manifesting in our physical world and having an impact upon it. But it seemed not to be bound to that world, as we were.

His conclusions mesh with those of some of the most thoughtful researchers ever to have looked into the UFO phenomenon, such as John Keel and Jacques Vallée, who ended up inclining to the paraphysical school of interpretation, or, crudely, the “Aliens as Demons” hypothesis, which sees the “aliens” not so much as spacemen from another planet, but rather as some kind of elemental entities from another dimension of reality, perhaps closely linked with our own.

Mack’s willingness to entertain the concept of alien abduction brought him the scorn of his academic peers. Although he was a tenured professor, Harvard formed a committee to investigate his conduct. Mack was forced to hire a lawyer to defend himself against accusations of unprofessionalism. Although the committee concluded its work without censuring Mack, it urged him to allow his colleagues and peers to have a greater input into his research as he continued his exploration of unusual phenomena. He replied that he would be happy to do so, if only they didn’t seem to run a mile whenever he suggested it. Tragically, John Mack was killed in a road traffic accident while on a visit to London in 2004. The John E. Mack Institute which he founded preserves his work and honours his memory.

The site contains many articles written by Mack as well as mp3s of interviews and lectures he gave.

As well as his academic credentials, John Mack brought a radiant humanity to paranormal research. His scholarly exploration of the abduction phenomenon proved liberating for many contactees who had previously remained silent, fearing the scorn and disbelief their stories would provoke. His death was mourned, and his life is remembered, by many of those whose lives he touched.