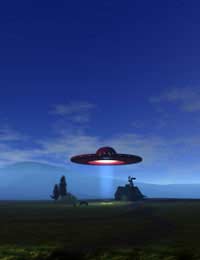 A common theme in the reports of those who claim to have been abducted by aliens is that some kind of scientific procedure is performed on the abductees. This can include for example, being subjected to some kind of invasive probing, such as the needle which was inserted into the navel of Betty Hill. Often, there are sexual overtones in the descriptions of what went on.

Sometimes the connection with human sexuality is even quite explicit. In many alien abduction accounts, aliens have been reported to have performed operations on human reproductive organs, or to have extracted human biological material such as semen or ova. Is this just innocent scientific exploration on the part of the ETs (extra-terrestrials), of the sort that our own scientists might perform on an unfamiliar species they encountered? Or is there something more sinister going on?

Alien Interest In Our Biology

Several researchers believe that aliens are involved in the cattle mutilation phenomenon. In a typical case, cattle are found dead overnight, parts of their body having been excised with a laser-like precision. Some human cadavers have also been found in the same condition. If aliens are responsible, these incidents also suggest a bizarre extra-terrestrial interest in the biology of our species and planet. Is it simply scientific enquiry or something else?

Those who have looked carefully into the alien abduction phenomenon often conclude that the experience runs in families. People who are abducted by UFOs will often have had parents who were abducted too and, likewise, their own children are very likely to be affected. It is as if the aliens are interested in particular genetic lines. Why?

The conclusion reached by many is that some kind of genetic experimentation is going on; that aliens are deliberately intermixing with human kind, producing offspring who are half human and half alien – usually known as hybrids. This genetic mingling may be done in an alien laboratory using genetic material extracted from abducted humans, or it may take place through conventional mating, either during the UFO abduction experience or in a standard relationship setting. Yes, there are people who claim to have been involved in a relationship with extra-terrestrials. These alleged aliens, by and large, are said to appear human and may be the result of earlier breeding programmes.

What Lies Behind the Alien Breeding Programme?

If alien-human hybrids do exist, what would they look like? Some abductees claim to have been introduced to their own hybrid offspring by the aliens who created them using their own genetic material. In the main, they are described as human-like in appearance with a slightly elfin cast. Indeed, producing part-alien beings, who are loyal to the alien race, but who can pass as human, is believed by many to be the goal of the whole extra-terrestrial project. This would allow them to live among us, unseen.

Many suggest that the ultimate intention of the ETs is to infiltrate our societies and our world and there are some who believe that this aim has already gone a long way to being realised. Are there aliens living among us, walking past us in the street, perhaps even exercising power over us through governments ministries? The dark implications of this train of UFO thought are awful and endless.

Did The Aliens Suffer A Breakdown On Their Own Planet?

A few more innocent explanations for the existence of a breeding programme have also been floated. The most benign is that the aliens have suffered some kind of biological breakdown on their own planet and need human genetic input in order to replenish their own potential. But this seems odd. Why would human genetics be of assistance to an extra-terrestrial species? Another interpretation is that aliens and humans are offshoots of the same genetic branch. Perhaps Earth was seeded by UFOs from space a long time ago. Or perhaps the aliens are a more highly evolved form of human. Some have even suggested that the apparent extra-terrestrials may even be our future selves – what Earth-based humanity eventually evolves into. Having suffered some unknown catastrophe in the future, they (or we) are forced to make forays back in time – using time-travelling technology - to recover samples of their (our) original genetic essence.

The belief that our extra-terrestrial visitors are engaged in some form of genetic experimentation is firmly entrenched in the UFO research community. Whether the motives behind it are benign or malevolent remains to be seen. If the darkest suspicions are ever borne out, of course, and the aliens really are infiltrating our society, by the time we realise what’s going on, it will probably be too late to do anything about it.

A Rough Guide to Extra-Terrestrial Visitors
Share Your Story, Join the Discussion or Seek Advice..
[Add a Comment]
There is an endless universe out there, this should not be a surprise. The question shall remain unknown until they decide humanity is ready to handle such news. Until then we should worry about our own planet. We are busy trying to figure the cosmos out when he have yet to explore our oceans.
OpenMinded95 - 9-Aug-15 @ 6:36 PM
IF aliens did live among us, and are interested in our DNA genetic material, why can't they assist us with curing diseases such as cancer?
Robbosmith99 - 8-May-15 @ 8:27 PM
I have been abducted by aliens since I was a little girl and didn't realize it until now.. the strang explain events that have taken place are truly breathtaking for a long time I've felt like I was different(not of this world) maybe because of the things I have seen but also because I now was able to predict things in the future.. I thought I had special powers I often wondered why me being a spiritual person I went to church seeking for answers and still felt incomplete like know one understood not even God and how could I tell anyone with out them thinking I was crazy but I can't take it any longer I want to know why me???!! Why don't they leave me alone????!!! I just want to be normal :'(
chosen - 2-Sep-14 @ 12:34 AM
I don't think the stories about aliens are true.Even ifstrange light appears or one sims to be able to comunicate wt some beings dat one sims to be able to comunicate with even without opening once mouth, dosen't mean one comunicate with Alien. Don't scare me. Don't make me to start thinking I can comunicate with Aliens
Mysterious Princess - 2-Jul-14 @ 6:19 PM
WHERE ON UNIVERSE DO THE ALLIENS STAY? AND DO THEY SURPASS US WITH TECHNOLOGY?
NJOK - 11-May-14 @ 4:02 PM
Aliens are an innocent Extraterrestrial phenomenon interested in the human species. Why? they're interested in having a sexual relationship with Michael. Because his reproductive organ is large.
Sterstick - 18-Jan-14 @ 7:37 AM
has anyone ever seen a very large bright light about 20 to 30 feet above you and the light blinks on and off four times directly into your face then the big light just disappear? the light is very quiet.
firefox - 16-Sep-11 @ 6:19 AM
May be a lot of what you mentioned is true
safron - 1-Sep-11 @ 9:55 AM
Hello, Many years ago, I and a young woman with the Defense Department, became involved with a group of ET's. For us and others we experienced lapses of time. These ranged from thirty minutes to twelve hours. Many years later I would come to understand what these lapses of time were about. Many of us abductees feel that the Aliens are introducing a genetic breed through the normal birthing process of our women.
Kenneth Hopkins - 12-Aug-11 @ 2:05 AM
Title:
(never shown)
Firstname:
(never shown)
Surname:
(never shown)
Email:
(never shown)
Nickname:
(shown)
Comment:
Validate: