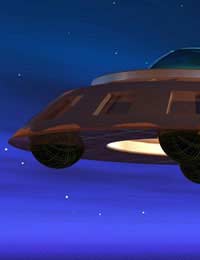 Are aliens intervening in Earth’s politics sending signals to our politicians about what they should be doing and what they shouldn’t be doing? Some researchers in the new field of exopolitics believe so.

Exopolitics is a branch of study whose founders believe it is time to go beyond sterile debates about whether extra-terrestrials are visiting our planet – they take that as read – and instead begin exploring the effects the extra-terrestrials have had and are having on our political systems.p

The cornerstone of much exopolitical thought is what happened at Edwards Air Force Base in 1954. On that day, Dwight “Ike” Eisenhower, President of the United States, is alleged to have met with a number of alien ambassadors. Some ufologists believe that the aliens tried to dissuade Ike from pursuing the development of nuclear weapons and offered him some juicy technological carrots if he would agree.

This incident is key for exopolitical researchers because it brings together a number of their favourite themes : that aliens exist; that Earth’s governments are aware that they exist and are concealing it from their people; that aliens are worried about what we humans are doing; and that some kind of secret deal may have been arrived at between Earth’s governments and extra-terrestrial beings.

Is there any proof that this meeting took place? A number of people claim to have witnessed some or all of it and some even claim the whole thing was filmed. But no concrete proof has emerged. On that day, official records show that Eisenhower had a dental appointment. So did Ike meet the aliens and make a secret deal or did he just get his teeth fixed? Hard to say.

When Aliens Send a Message

Exponents of exopolitics tend to believe that aliens are concerned with what takes place on our planet, to the extent of intervening in Earth politics to promote actions they approve of or to dissuade us from pursuing courses of action of which they disapprove.

Citing what they call “Context Communications Theory”, they tend to read great significance into the context of time or place in which UFO sightings take place. Carefully interpreting this context, they believe, may reveal the message the aliens are trying to send.

To take some recent examples, on November 7 2006, a UFO was spotted hovering in the sky over Chicago’s O’Hare airport. Many people, including air crews, ground control staff and passengers, saw and took film and photographs of the object. So what? Just another UFO sighting, you say. Not so, say the exopolitics guys. Look at the date : November 7, mid-term elections day in the United States. On that day political control of the U.S. congress passed from Republican to Democratic hands. The exopolitical interpretation of this is that the aliens were unhappy with the belligerent policies the Republicans had pursued, and approved of the change of power.

Similarly, when a UFO was spotted hovering over a peace rally in Cleveland, Ohio, in March 2007, exopolitics researchers believe it was a signal that the aliens were endorsing the peace activists, expressing unhappiness with the continuation of the war in Iraq.

It’s hard to know what to make of the new discipline of exopolitics. Part of it seems just like old skool UFO research repackaged to give it a veneer of academic respectability. The “context communications” interpretation of UFO sightings is certainly new and interesting, though. In some ways it’s comforting to think that benevolent aliens might be intervening in Earth’s affairs to get our politicians to do more sensible things than they would otherwise. But interpreting the purported political message behind any UFO sighting is highly subjective, and runs the risk of injecting partisan political divisiveness into what should be the objective scientific study of a phenomenon.
Next Page