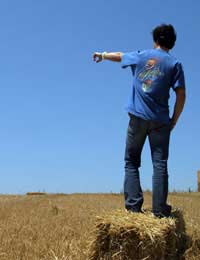 You might have thought that Doug and Dave had blown the whole crop circle movement out of the water or out of the corn, so to speak. But you’d be wrong. The two elderly hoaxers – or “performance artists” if you view them more sympathetically – confessed in 1991 to creating crop circles all around Southern England during the previous 13 years. The media lapped up this confession just as it had once lapped up the circles themselves.

Crop Circles in the Wake of Doug and Dave

So why didn’t the crop circle experts pack their bags and go home? Well, some did. Pat Delgado was co-author of one of seminal crop circle mystery books, Circular Evidence. When Doug and Dave confessed to hoaxing some crop circles that he had personally pronounced authentic, he was stricken with shame and embarrassment and withdrew from the field altogether. Most other experts, however, did not.

Instead, they tended to adopt the position that, while most crop circles were hoaxes – the numbers usually quoted were 80% or 90% - a small proportion were the real thing. These last ones had something genuinely mystical about them. Perhaps, they suggested, the whole Doug and Dave thing was really a disinfo op engineered by the government to stop people taking the real crop circles seriously. The experts continued to ply their trade and took to calling themselves “cereologists.” Cereologists claimed to be able to tell the real circles from the fake ones. In real ones, they said, the crops are only bent, not broken.

Sacred Geometry of the Crop Circles

Among the ranks of the cereologists, the hardest of the hardcore is Michael Glickman. He protested vigorously when crop circle celebrity Colin Andrews declared that 80% of them were fake. An inventor, architect and engineer who has been employed as a professor at respected universities, Glickman waxes lyrical about the mystic beauty of the crop circles. To him, there is a profound mathematical beauty inherent in their designs which can only be unearthly in origin.

Visit a few of the web pages of the crop circle devotees - where they have continued to discuss the phenomenon and to chronicle the images produced. Look at aerial photography of the crop formations, and you will see that many of them are, indeed, strikingly beautiful.

Circle devotees speak of the “sacred geometry” of the circle designs. They claim the circles have healing properties and that Lourdes-style miracle cures have been experienced. Sets of healing cards with crop circle designs emblazoned on them have even been produced. Circle fans claim that glasses of water can be placed on these cards to be charged with the sacred, healing energies emanating from the design.

Interestingly, there is scientific research which appears to back up the claims of some mysterious “life-affirming effect” in the crop circles. American biophysicist W. M. Levengood studied samples of plants taken from crop circles and found that they experienced enhanced seed germination when compared with other plants.

Crop circles seem to have been successfully absorbed into “New Age” style belief systems, with some claiming that the Earth itself was creating the designs as a kind of cry for help. Once the crop circles began to become more complex in nature, however, the obvious connection with flying saucers was lost. No one seriously argued that a flying saucer shaped like the Julia set was landing in the fields at night. In 1996, however, an amateur video surfaced which appeared to re-affirm the UFO connection.

The video, taken at Oliver’s Castle in Wiltshire, showed mysterious balls of light hovering over a field where a geometric-style design was imprinted in the crops. This seemed to be the proof the cereologists had longed for: UFOs created the crop circles after all! Several experts rejoiced publicly over the footage and unhesitatingly proclaimed it genuine. Unfortunately, it too was a hoax. The hoaxer, John Wabe, later confessed on camera - to the great consternation of some of the “experts.”

In a somewhat tortured attempt to accommodate the clear evidence of a human hand behind so much of the crop circle phenomenon, some cereologists have argued that, even if humans were responsible for creating the designs, they may have been acting under alien influence. Curiously, Dave Bower, one of the original crop circle hoaxers, has lent some credibility to this claim. A newspaper article in 1998 quotes him as saying that “something out there” was telling him to do it. “I honestly believe I was programmed by some force to make those circles,” he said.

Although interest from the popular press has ebbed, fascination with the crop circle phenomenon continues on the internet. Many find the designs enchanting and some continue to be convinced that they represent a message from “Out There.”