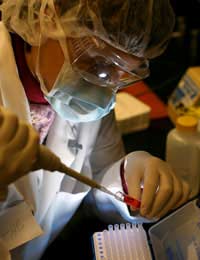 Most of us know what aliens look like, even though we’ve never seen one. Over the decades in which reports of contact have been coming in, we’ve collectively formed an impression of the appearance of these mysterious visitors : small bodies, large heads and insect-like eyes. This is the image that haunts the thoughts, whether waking or dreaming, of thousands of abductees : those who claim to have been spirited away by the aliens, subjected to tests and experiments, ultimately, for purposes unknown.

But though no one can be sure of what the end purpose of these experiments is, some are not shy about speculating. One of the most popular theories is that the aliens are engaging in some kind of genetic experimentation, perhaps even a breeding program designed to create an alien-human hybrid.

While it’s endlessly fascinating to ponder what aliens look like or what their intentions might be, in the end, proof to support our guess-work is nowhere to be found. Or is it? There is one remarkable artefact that some believe represents hard proof of both what the aliens look like and what the goal of their experiments is : the Starchild skull.

The Starchild skull is that of a five year old female. Recovered from a cave in Mexico in the early 20th century, along with the remains of an adult female, carbon dating techniques have placed it at around 900 years old. While the adult skull appears normal, that of the child is extraordinary. The cranium is much larger than normal and the eye sockets are more shallow. At the back, the skull is strangely flat and seems to extend downwards much further than a conventional human skull. In total, the Starchild skull has a brain capacity 200cc higher than that of a normal adult skull.

When the skull was brought to the attention of Lloyd Pye, a paranormal researcher, he was immediately intrigued. Clearly, the skull did not correspond to any normal human head. Could this be the skull of an alien, he wondered? Or an alien-human hybrid? Certainly, its features appeared to correspond to those of a typical alien Grey.

Pye has arranged for the skull to be subjected to a wide variety of scientific tests. It was found to contain human DNA, consistent with that of the general Amerindian population. Although this rules out the hypothesis that it was an alien skull, it leaves open the possibility that it came from a hybrid.

Explanations for the Starchild Skull

All of the experts consulted by Pye uniformly declared that they had never seen anything like the Starchild skull before. It is, of course, possible that the supposed Starchild was simply deformed. Extreme deformities are not unknown. Proponents of the extra-terrestrial explanation argue, however, that the starchild’s deformities would have been so great as to make the foetus unviable. If this is true, it would mean either that the child did not have a normal birth, or that the abnormalities developed afterwards. Deformities are also usually not symmetrical in nature, while the proportions of the Starchild skull exhibit a strict symmetry.

Is there any medical condition that could account for the anomalous features seen in the skull? Some have suggested that the disease hydrocephaly (also known as water on the brain) could perhaps explain them. Hydrocephaly involves a continual build-up of fluid in the brain. With modern medicine, the fluid can be drained and the condition need not prove fatal. In earlier times, however, hydrocephaly would inevitably result in death.

What is noteworthy, though, is that, in a growing child, the body may attempt to fight off the inevitable by creating more room for the increasing volume of fluid. In other words, the skull would expand to accommodate the pressure on it. Some have suggested this as a possible explanation for the Starchild skull. Pye rejects this hypothesis, however, arguing that hydroencephaly would have left distinctive marks on the inner skull area, indicating erosion.

Other conditions which have been proposed as possible explanations for the Starchild’s skull’s anomalous shape are Brachycephaly, which involves a widening of the skull, and Crouzon’s syndrome, whose sufferers exhibit distortions of normal bone structure in the head.

Opinion is still greatly divided on the Starchild skull. Some believe rare genetic disorders could account for its strange shape, while Lloyd Pye and his supporters maintain it is evidence of an early genetic experiment performed by extra-terrestrials.

Moon Mysteries
Share Your Story, Join the Discussion or Seek Advice..
I have alien visits and abductions for years,some i remember ,some i do not fully remember. Recently[20120] i was implanted with a tiny thing on my left ear[just in front],,,,after t birth of my 3rd daughter,i noticed she also had this.[she came from a very far space ],she ,like me,has many issues with sensory processing and we are deep empaths. about a month or so ago,it felt as if mine was 'leaking',i was getting headaches and fatigue ..i then had another lucid 'abduction' when it was all 'fixed',a long instrument was put through my ear and nose and into my right eye[which i already have Aides holmes pupil],...i woke up seeing shapes of beings leaving me.when i sat up,and for a few days after ,my eye and nose were watery constantly,then it stopped. the headaches stopped,the pulsing by my ear stopped,the overheating stopped!! now i sometime see as if watching a video in high resolution. i get senses when to go out to view the sky and have felt very strongly when they are here. they have told me ,they are preparing a kind of 'etheral silk net' to protect the earth and humansfrom the 5g developments.!!!!
ursa - 11-Jul-19 @ 3:18 PM
i was in my kitchen at 11.00 at night when i saw a strange being at my window.it then told me to come outside.i went outside in the garden and it told me that it came from zeta reticuli.it then took me aboard the ship and TOOK me to their home star system.we landed on their planet and the alien gave me a metalic rock to give to someone else on the planet....
at - 3-Jan-16 @ 7:07 PM
Title:
(never shown)
Firstname:
(never shown)
Surname:
(never shown)
Email:
(never shown)
Nickname:
(shown)
Comment:
Validate: