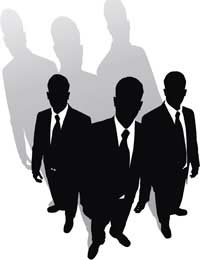 The term Men in Black now has comic connotations for most of us, having become famous through the Hollywood films of the same name starring Tommy Lee Jones and Will Smith, as secret agents working to keep Earth safe from “alien scum.” The real Men in Black are not funny at all, however. They represent one of the creepiest, most sinister and most genuinely frightening aspects of the UFO phenomenon.

The Mystery of the Men in Black

It all started in the 1950s. Those who had seen UFOs and had gone public with their testimony started receiving odd visits from mysterious strangers. These were the Men in Black (MIB) – although occasionally a woman would be present too. Typically, they would just turn up on the doorstep, often phoning beforehand, usually arriving three at a time.

As the name suggests, they would usually be dressed in standard black business suits. But there was something odd about their appearance. Those who were contacted by them often commented afterwards on how old-fashioned but curiously new their clothing looked – as if it had just been manufactured. And not just their clothing – the cars they arrived in would, likewise, be dated in style and just a little too perfect. But that wasn’t the oddest thing about them. Very often their bodily appearance was strange too. Often, they were described as having no eyebrows or even painted-on eyebrows. Some of the men even wore lipstick.

But their strange appearance paled in comparison with their strange behaviour. Their physical movements were often unnatural and jerky. In conversation with those they visited, they would invariably raise the subject of the recent UFO sighting and would warn the witness to keep quiet about it. The warnings were often accompanied by threats, sometimes explicit and sometimes implicit, usually delivered in a stilted B-Movie fashion - “If you love your wife and kid, you’ll keep your mouth shut.” Often, the MIB would display a bizarre ignorance of conventional etiquette – sometimes the males are reported to have openly fondled the females while they spoke. Occasionally, the MIB would say strange things like “Am I doing this right?” or “My energy is running low.”

Who were the Men in Black?

What lay behind the mystery of the Men in Black? Were they aliens who were somehow able to transform their appearance, however imperfectly? This explanation would make sense if the aliens wanted to conceal their presence on Earth and it would fit with the observed strangeness in their appearance and behaviour. A variant on this idea is that the Men in Black may have been some kind of androids created by the aliens to carry out their wishes – perhaps specially manufactured for the occasion. This would account for the “brand-new” appearance of their clothes and belongings.

Or it could all lie in the imagination of paranoids, or the fabrication of fraudsters. Some MIB visits had multiple eye-witnesses, however, who included among their ranks credible people who were unknown to the person being visited - so it seems unlikely that they were entirely imaginary.

The Men in Black represent one of the most intriguing aspects of the UFO mystery. Most reports of them date from the 50s, 60s and 70s, however. It is not clear whether they are still active. But if you see an old-style black limousine cruising down your street one day, perhaps you’re about to receive a visit. Not to worry, though – although the Men in Black made many threats, they are never known to have made good on them.

Crop Circles
Share Your Story, Join the Discussion or Seek Advice..
I waas told of numerous encounters with the M.I.B's from a friends mother. She described a circumstance in which she discovered hidden missles in texas. She was told not to say anything to anyone. She mentioned that they tried to intimidate her every once and a while by following her and showing up to her house. She also mentioned another huge secret. The discovery of aliens living amongst us. While she was working construction she overheard the people in the neighborhood discussing how to make their appearence as humans realistic. the women had many empty baby carriges that they were strolling around the neighborhodd with. they were discussing what would be an appropriate time for them to have there babies. They paid her no attention as she had already earned government clearance for previous witness accounts.
Iknownow - 29-Sep-11 @ 8:10 PM
Title:
(never shown)
Firstname:
(never shown)
Surname:
(never shown)
Email:
(never shown)
Nickname:
(shown)
Comment:
Validate: