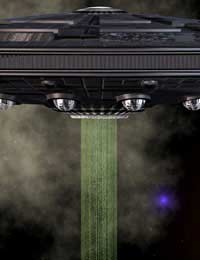 Cattle mutilations are one of the phenomena most closely associated with UFOs in the public mind. The spooky, laser-like incisions found in the cadavers of the dead animals seem unearthly and inexplicable. Many have surmised that aliens are performing some kind of bizarre experiments on these helpless beasts. But are they stopping there? Some believe that not only cattle are the victims of this horrific practice, but humans too.

Under the name of Project Grudge the US government issued several reports downplaying the UFO phenomenon. Bill English claimed that a secret 13th report existed, and that while a member of the US military, he had been asked to write an analysis of it. Years later, and now out of the service, he dictated his recollections of what the report contained. One incident he recalled was that of Sergeant Jonathan Lovette, who worked at the White Sands Missile Range.

While on a two-man mission to collect debris from outside of the base perimeter, something very curious happened. Lovette’s companion returned in terror to the base and claimed he had seen Lovette whisked into a flying disk by some kind of tentacle-like appendage which descended from the vehicle. Days later Lovette’s body was found, bizarrely mutilated. As in the cattle mutilations, the genitals, rectum and eyes had been cored out and the body was drained of blood. Lovette’s companion was initially charged with murder but the charges were later dropped.

In Britain there is the extremely curious case of Zygmunt Adamski. A Pole who had come to Britain during the war, and settled here afterwards, 57 year-old Mr. Adamski disappeared one night while popping down to the local shop to buy some potatoes. His body was found four days later at the top of coal pit, approximately 30 miles away. There were strange burn marks on his body, and it looked as if some kind of ointment had been used to treat them.

Discussions with local health experts were unable to identify this ointment. Locals, including police officers, had seen strange lights in the sky on the night Adamski’s body was found. Even the coroner pronounced himself baffled by the death, and said that its mysterious nature lent credence to the “UFO theory.”

Tony Dodd is a former British police officer turned UFO researcher. He believes that human mutilations are occurring on a large scale, and that many of the thousands of unexplained and unresolved disappearances which take place each year may be accounted for by the extra-terrestrials. In his book, Alien Investigator, he describes how he and other researchers encountered strong pressure from above whenever they attempted to probe too deeply into cases of human mutilation victims. Dodd believes that those in the ultimate positions of power know perfectly well what is going on but, perhaps because they have made some sinister compact with the aliens, choose to cover it up.

If it’s true that aliens are excising parts of our bodies, what exactly are they doing with them? One clue lies in the testimony of Myrna Hansen, who claimed she had been abducted by aliens. Under hypnosis, she recalled being taken to an underground base - believed to be in Dulce, New Mexico – where she saw scores of human and animal body parts preserved in liquid-filled vats. Hansen believed the aliens were attempting to produce genetically-mixed creatures – hybrids – by mingling alien DNA with that from Earth-based creatures.

The possibility that humans are being mutilated by aliens is one of the most frightening speculations ever to emerge from UFO research. We can only hope, in this case, that the sceptics are right.
Next Page

Moon Mysteries
Share Your Story, Join the Discussion or Seek Advice..
[Add a Comment]
I have had a highly unusual life in many ways. However, there is no time to narrate hundreds and hundreds all sorts of experiences, which humans, - being absolutely limited in understanding of what they call "reality", - would call "paranormal", as if their "reality" is normal!?? Talking about implants. About 7 years ago I've learned, while being regressed, that I have 15 implants. In March 2012 I've learned (while being again in trance state) I've had over 150 implants. I remember that during Sunday workshop in London in 2011 Dolores Cannon have told me that someone has had "even" 49 implants. Am I the Champion of the World regarding amount of implants? One of many-many things which is puzzling about me is my weight. I'm petite and of a very slight ballet dancer build, with very fragile looking bone structure. At the same time I'm immensely strong and have an incredible stamina. I have nearly the same body which I've had in my youth when I weighed 44 kg. What is strange is that when I stand on the scale now, the scale shows 60 kg. How comes? I'm 55 years old, the bones are supposed to get more porous with age as the result of loosing calcium. Another strange thing: I never get ill. I'm so sure that somehow everything will be taken care of, that I always travel without medical insurance. "Miracles" constantly happen to me. For example, on the 14.04.2010 my airplane has been turned away in midway on route from Chicago back home to London because of volcano explosion in Iceland. On this day I've developed a very unusual frightening cough and I didn't have any money on me to buy medicine. Sitting on a bench this night in the hotel, where BA had put us all in, to my mild surprise (I stopped being surprised by nearly anything long time ago) 20 dollar bill materialised on the bench from thin air. I bought the medicine and stopped some nasty illness developing. One night in March 2012 very curious symmetrical markings, looking like a burn of second degree (was not painful at all) appeared on my arm. The two markings looked the size and the shape of Grey's almond shaped eyes. I took several pictures of these "eyes" on my arm with a month interval. In 6-8 months the markings have completely faded away. This has happened after my boyfriend and I have found a portal in Richmond Park. Believe it or not, I've created this IDEAL boyfriend by THOUGHT FORM: it is impossible to find the combination of the qualities he has in "natural world". I do not think that the portal was to nice beings. But it is a very long story to tell why I think so... I view the "eyes" as the reassurance: don't be scared, we are with you. I remember one night I've suddenly woke up because of excruciating pain in the middle of the brain (which is curious: in all my life I've experienced a mild headache and only twice). Considering that just a second ago I was in a deep sleep, I've had a very clear thought: "It THEM! The pain will stop NOW!" And the same
Lana Johnson - 10-Feb-17 @ 12:14 AM
"Reports from people who claim alien abductions first became widespread in the 60s and 70s." No, not at all. They became widespread in the 1980s. The abductions may have occurred in the 60s and 70s, even the 50s, but aside from the Betty and Barney Hill case, they were not widely known until books by Whitley Strieber and Budd Hopkins brought the news of abductions into wider public awareness.
Old guy - 9-Apr-15 @ 2:28 PM
I have to agree with "Will" above...Mr Greer has no credence as far as I can see to his theory that "aliens" are harmless...why would they be ? ...he does charge lots of money for his "contact" and "observation" field trips though,which may be why he wants us to believe the aliens are here for our benefit...again,why would they be ?
Gini - 17-Feb-15 @ 2:41 AM
It started when I was about 5 years old, and continued most of my life. It's too detailed to get into because each encounter was different,but I do believe (now) that I was chosen because I was born with a very rare anomaly. A double uterus with two separate cervices called Uterus didelphys. Anyway, the last encounter was different. I knew they were done with me. I do have something on my inner right wrist that stuck out and sometimes hurt. It was the size of a pea and I had it most my life. but seems to have subsided. It's still there because when I press on that area, I can still feel it. Only a few people in my life know what has happened to me and I have come to accept the fact that there are more than us in this vast universe. What they wanted with me, I truly do not know.
ljeana - 9-Feb-15 @ 11:10 PM
Hello: I am a journalist and author with many published articles and several books to my credit. I write to ask if you would publish an open letter to Dr. Steven Greer. As a long-time UFO researcher I have some serious issues with his own lack of disclosure concerning where he gets his inside information about extraterrestrials? In addition, he claims that ET contact is harmless and even trains groups of people to make contact. However, any serious investigator knows the field is littered with UFO contactee casualties. This is an odd position for a Dr, who claims to know the real inside scoop, I ask him to please be as forthcoming as to where he learned what he knows as he demands the US government be with what they know... yours, Will
will - 27-Apr-14 @ 9:45 PM
Title:
(never shown)
Firstname:
(never shown)
Surname:
(never shown)
Email:
(never shown)
Nickname:
(shown)
Comment:
Validate: